Wachtell, Lipton, Rosen & Katz was the leading legal adviser globally for mergers and acquisitions in 2019, according to GlobalData.

The American law firm advised on 76 deals worth $689.3bn (up 43.96% year-on-year) including the biggest transaction: Bristol-Myers Squibb’s acquisition of Celgene for $89.5bn.

GlobalData published the top 20 league table of legal advisers ranked according to the value of announced deals globally.

Ravi Tokala, financial deals analyst at GlobalData, said: “Wachtell, Lipton, Rosen & Katz emerged as the top legal adviser in 2019, even though the firm advised on only 76 deals, which was the third lowest number among top 20 advisors, mainly driven by its involvement in 16 megadeals (>$10bn) among 36 deals recorded.

“Despite advising on the highest number of deals, Kirkland & Ellis ranked second, as the firm was involved in low-value transactions and less megadeals.” 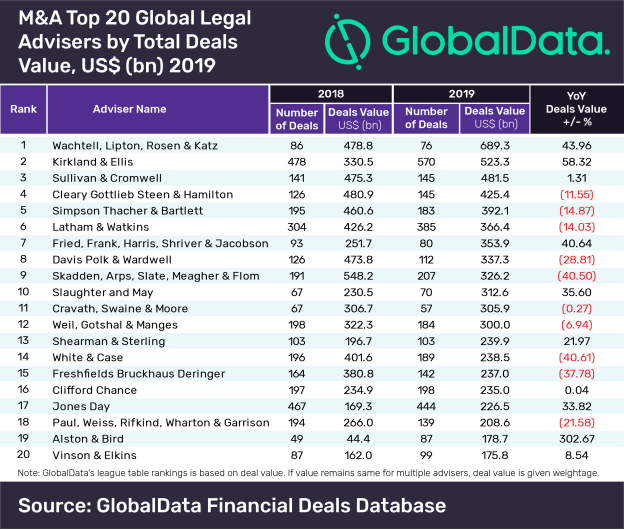 In terms of deal volume, Kirkland & Ellis topped the table with 570 deals, followed by Jones Day with 444 deals worth $226.5bn.