Wealthy investors are decreasing their allocation to hedge funds as returns rarely justify high fees. Hedge funds themselves seem less interested in the HNW investor as they turn themselves into family offices. Melanie Sneddon asks whether this is part of a cycle, or something larger?

The golden days of superior returns and huge fees look like they might be over for hedge funds. In recent years financial markets have been undergoing a dramatic evolution and last year hedge funds produced their lowest returns since 2011 with many funds closing their doors.

Few managers have been able to recreate the annualised double-digit returns of the 1980s and 1990s for which they were once renowned. Since the 2008 financial crisis, quantitive easing, low interest rates, a saturated industry and a more vigilant regulatory environment has meant that hedge fund managers have found it harder to make such impressive returns. Though assets under management (AuM) have increased markedly, these are now concentrated in fewer funds.

Today, the hedge fund industry is reported to be worth $3.1trillion and is coated in a veneer of good health. Nevertheless, in recent months, the demise of the hedge fund supremacy has been widely reported, with funds seeing outflows for the second time in three years. Hedge Fund Research (HFR), an industry monitor, reported that 2018 saw net asset outflows of $34billion, approximately one per cent of the industry’s capital.

Countless funds have closed their doors in the past three years such as Highfields Capital Management which closed its $12.1billion fund. Several high profile hedge fund owners are turning their firms into family offices. John Paulson is considering turning his firm, Paulson and Co, into a family office and Leon Cooperman of Omega Advisers reformed as a family office at the end of 2018.

Many cycles have come and gone over the decades under turbulent and benign market conditions and there are many theories as to why hedge funds simply are not making the returns of old. Private Banker International investigates what happened to the one-time poster child of alternative investing, and how HNWIs should view their allocations to this asset class.

The colonisation of institutional investors

In 2018, institutional investors formed nearly 65% of investment into hedge funds, typically allocating between 10% and 20% of their capital to the sector. The remaining 35% was made up from family offices, wealth managers and foundations, in other words, individual wealth.

The balance between individual and institutional wealth was not always like this, however. In the early years of the industry, in the 1970s and early 1980s, hedge funds attracted a much greater amount from HNWIs and family offices.

Over time, hedge funds became more widely acknowledged for their sophisticated strategies and risk-adjusted returns, and so attracted more money from institutional investors. But that has also increased pressure for transparency. Hedge funds have had to adapt to a more risk-controlled environment with tighter operational controls and compliance policies and procedures. Consequently, costs have escalated and friction has been added to their operations. 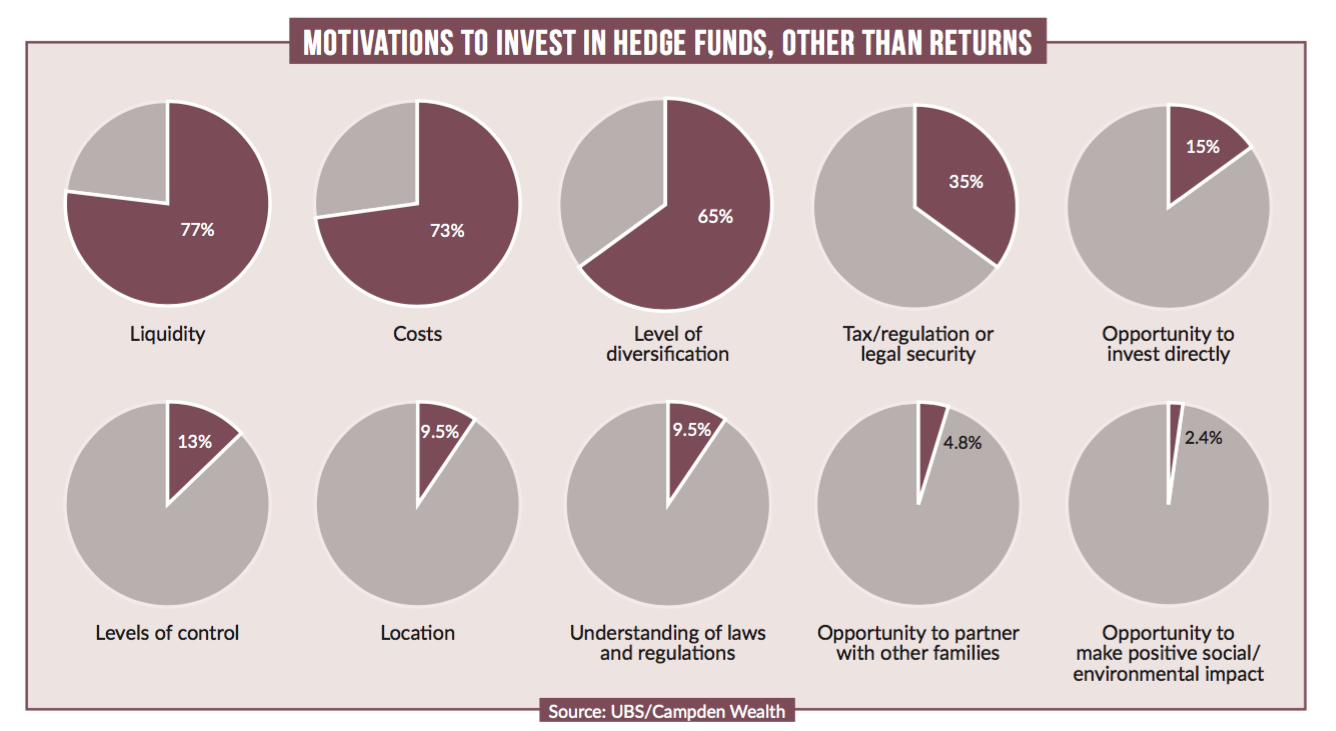 Two and Twenty or One and Ten

Performance aside, one of the largest criticisms of the industry has been the traditional fee structure of ‘two and twenty’— a two per cent management fee plus 20% of any performance gains.

Investors have had every reason to question the high management fees with diminishing returns and managers have found it harder to convince investors that the good times will return. This was exacerbated during the last quarter of 2018, with financial market turmoil across all asset classes.

As a result of increasing pressure from investors, fees have been on the decline. The demand from investors for bespoke fee arrangements continues to increase and, with every new fund launched, the industry has seen less of the ‘two and twenty’ fee structure and has moved towards levels considerably less than this with one investor confirming that he had “not paid more than one and ten per cent for a while”.

Artificial intelligence and machine-learning technologies are changing the way that many funds operate. Operational efficiency and the hunt for the best systems and data specialists has been high on the agenda in an ever-increasing tech-savvy financial environment. The competition to hire and retain talent within fund operations is becoming increasingly important to improve efficiency.

The rise of the hedge fund giants

A waning of fund launches and numerous liquidations has slimmed down the industry leaving only those that have adapted to the new environment remaining. Investors have created a herding effect by pooling their money into fewer, more well-established funds, and those chosen few now manage tens, if not hundreds-of-billions in assets. At the end of 2018, Bridgewater boasted an AuM of $160billion and the London-based Marshall Wace $39billion.

With unprecedented financial clout, these giant hedge funds have bucked the trend of declining returns. Bridgewater’s Pure Alpha defied the market with a return of almost 15%, delivering the fund’s best performance in five years. Big names such as Two Sigma, DE Saw and Renaissance Technologies also saw large returns in 2018, underlining how some of the hedge fund industry’s giants have managed to succeed despite turmoil in the financial markets.

But with the ever-growing concern of an economic slowdown, there are questions about how the hedge fund industry will fare in the future.

Will the glory days return?

Hedge funds have endured a challenging period and as the industry looks ahead to 2019, the future may look uncertain. Market turmoil and risks remain, but the industry is more institutionalised, more globalised and strategies are more sophisticated. Preqin has suggested that the hedge fund industry will grow by 31% in the next five years, reaching $4.7 trillion in 2023. Established names such as former BlackRock’s Michael Phelps is reported to be launching Tresidor Investment Management and former BlueMountain Capital’s David Zorub will be launching Parsifal Capital Management in 2019.

Hedge funds continue to be an integral part of the investment landscape despite nearly a decade of underperformance, and the market is yet to see the extensive exodus by investors that occurred a few years ago. Instead, investors are reallocating their capital to the more established funds. There’s hope that more volatile markets in 2019 will create a trading environment that is favourable to managers who can capitalise on this, and that the industry will continue to adapt and evolve.

It is not yet known, however, whether these hedge funds that are fewer in number but more dominant in size have lost their agility and become too cumbersome to recreate the huge returns of the glory days.

Sparking the renaissance in art-backed lending

There has never been a better time to teach children

COVID-19: protect yourself against fraud