Snapshot for week beginning 11 July. The IPO business, which retreated for a good part of 2020 and early 2021, has returned with a vengeance, and Wall Street banks have just racked up $650m in fees and stock gains in the busiest IPO week since 2004.

The world’s largest investment banks made more money in fees during the first nine months of the year than at any point since before the 2008 financial crisis, fuelled by emergency fundraisings, initial public offerings and a rash of mergers and acquisitions activity.

In the last week of June alone, 18 companies were seeking to go public, including Chinese ride-hailing company Didi Global in what will be the biggest IPO of the year (Didi has reportedly priced at $14).

That’s the most companies in a single week since 2004.

At least 14 companies raised $100m or more in offerings on the Nasdaq and New York Stock Exchange, the most active stretch for debuts since 2004.

In total, underwriters generated close to $400m in fees for assisting with the IPOs. They were sitting on an additional $259m in paper gains as of Friday’s close, assuming they exercise their options to purchase all of their allotted shares at the IPO discount.

The first and second half of the year

The first half of the year was a bumper season for the IPO market, which saw 213 IPOs raise over $70bn.

It’s not just the number of IPOs: the dollar value was high. There are 16 IPOs that have raised a billion dollars or more in the first half, and Didi and SentinelOne are likely to make it 18.

After slowing somewhat in May, June was also the busiest single month since August 2000.

In Q2 2021, IPO deal numbers and proceeds posted the best performance in the second quarter for 20 years.

Traditional IPOs stepped back into the spotlight in Q2 helped by ample liquidity in the financial systems and strong global equity market performance.

Deal of the week: Blend Labs raises USD360m in IPO of shares

Blend Labs, Inc., a US-based provider of white-label platform that banks can use to underwrite and service mortgage loans, credit cards and other consumer financial products, has raised USD360 million in initial public offering (IPO) of 20 million shares at a price of USD18 per share.

Rewards for IPO investors, but mostly on the first day

IPO investors have been rewarded: excluding two high-flying micro-caps, the average IPO returned 26% in the second quarter, according to Renaissance Capital.

However, the vast majority of that return (24%) was earned on the first day of trading.

In the past week’s IPOs, underwriting fees ranged from 2% of the total amount raised, in the case of ride-hailing company Didi’s massive financing, to 7% for smaller deals like the offerings from health companies CVRx, Aerovate Therapeutics and Acumen Pharmaceuticals.

Goldman Sachs and Morgan Stanley, as usual, reeled in the highest fee revenue by serving as the lead managers for the IPOs of Didi and cybersecurity software vendor SentinelOne, the two biggest offerings of the week. 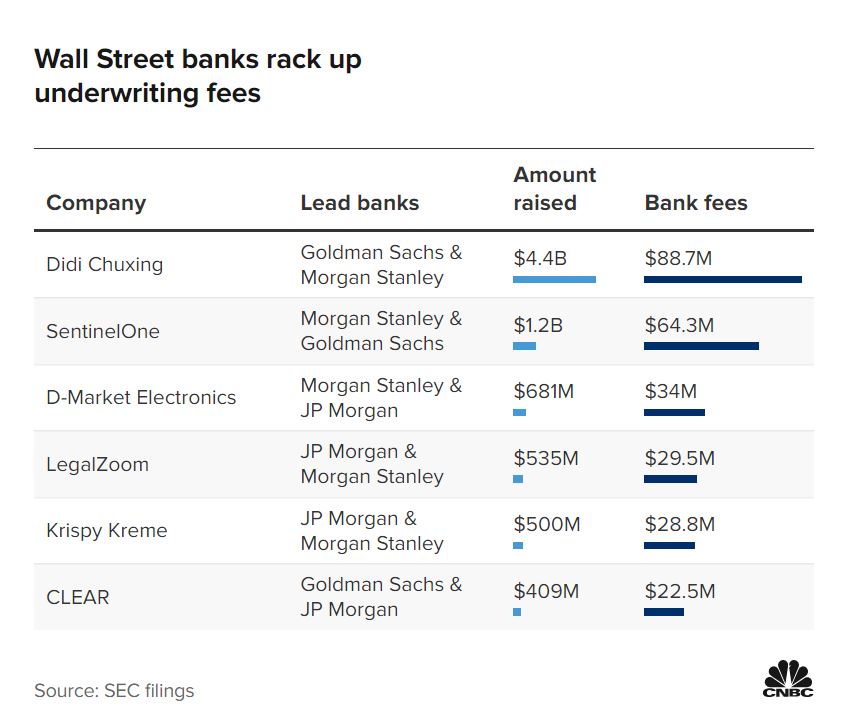