Undeterred by Brexit, many private banks started opening offices in the North of England last year. Oliver Williams investigates and asks whether this is the beginning of something much larger?

England is divided. The GDP of its capital, London, was £408 billion in 2016, practically 35% more than the entire North of England, which was £304bn according to ONS figures.

What constitutes ‘the North’ is a matter of ancient debate and one that creates furor in Midland households, which straddle the subjective border. However, by all definitions, the cities of Liverpool, Leeds, Manchester and Newcastle constitute ‘The North’, so do the counties of Yorkshire, Cumbria, Cheshire and Northumbria.

Central to the division between the north and south has been economic prosperity. London and its surrounding regions have recently been growing much faster than England’s northern regions. However, that is starting to change as the north sees an entrepreneurial resurgence. Some private bankers are taking note. 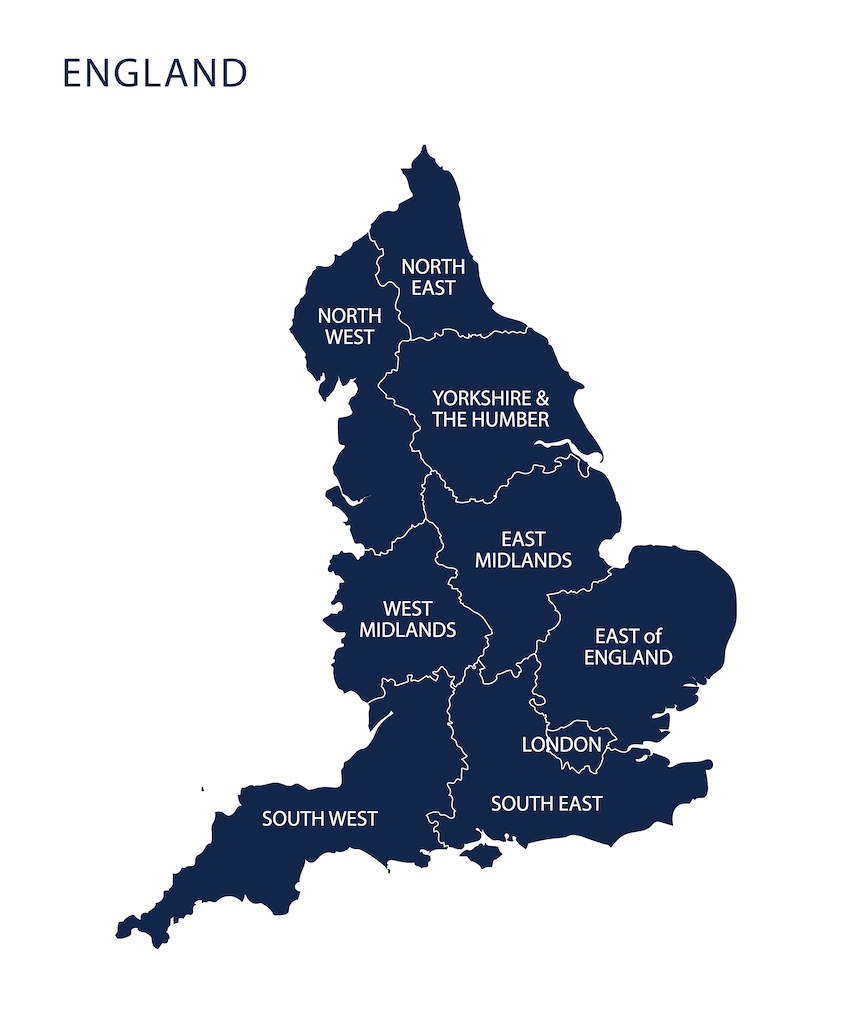 Anything but grim up north

“In my opinion it’s myopic to see the UK in the context of the southeast,” David Durlacher, CEO of Julius Baer International, told PBI. “The pace of growth in the north, clearly, is benefiting from many years of investment. We therefore see the pace of growth faster in those parts of the UK than in the southeast”.

Part of that investment has come from the government’s Northern Powerhouse strategy. Started in 2016, the initiative has earmarked £3.4 billion for infrastructure projects in the north of England and a further £13 billion for transport, which includes the HS2 rail network linking major cities.

Projects like these are far-sighted but have already given a boost to cities like Manchester. The Centre for Cities, a think-tank, estimates Manchester has seen an 84% growth in the number of jobs between 1998 and 2015. Population has grown 149% over the same period, which means there is more demand for housing.

Housing, the great bellwether of the British economy, shows the northern resurgence better than most indicators. A report in November last year from Savills, an estate agency, predicted growth in London house prices of just 4.5% over the next five years, blaming a “stretched affordability”. Over the same period the greatest growth will be in the north, however: “Conversely, we expect growth in the North West and Yorkshire to be over 20% by 2023.”

Investec Private Bank says many HNWIs are following that growth northwards. In a survey of HNWIs in November, the bank said, “respondents would be more likely to purchase a prime property in Manchester than in London”. Its Prime Property Hotspots of the Future report said there is a “diversification in the market towards East and South London, Manchester and Cambridge”. 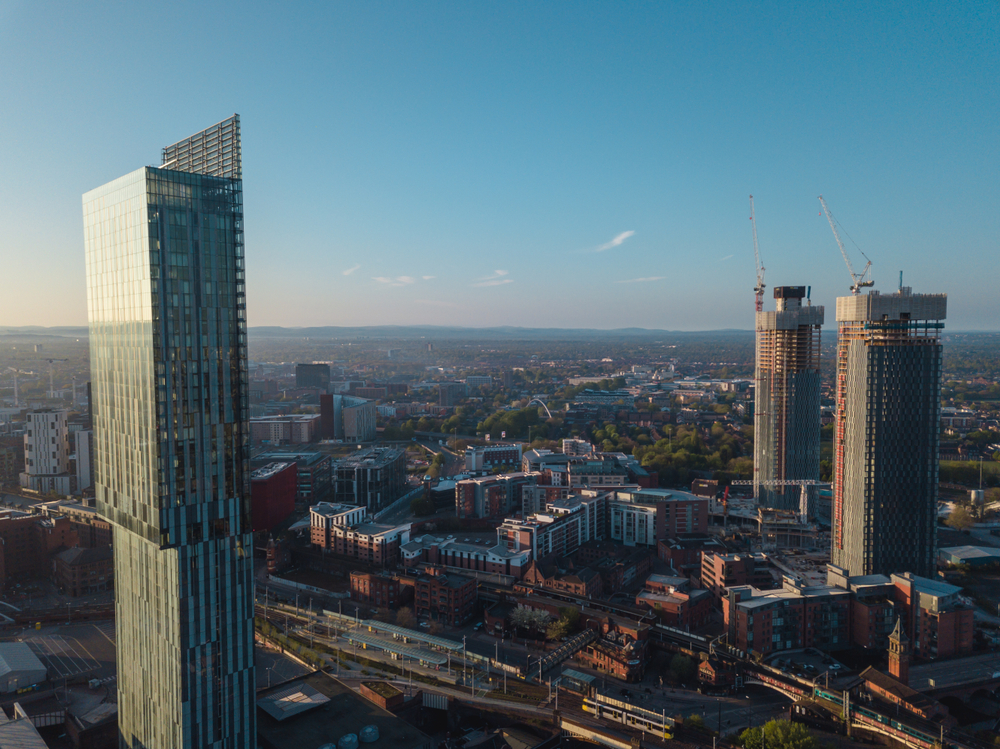 “Our expansion plans over the next three to four years is to almost double that book. About 60% of that growth will come from mortgages.”

“There is a clear entrepreneurial spirit across the region,” Stephen Fletcher, deputy chief executive of Arbuthnot Latham, told PBI.

This entrepreneurship is being driven by a multitude of factors. Technology is one: “Manchester’s tech sector continues to be boosted by investment,” says Fletcher. Technation, a network for tech entrepreneurs, says the city now boasts £2.8 billion in Gross Value Added (GVA) and an average growth of 17% in tech companies employing more than 10 people.

The Greater Manchester Export Grant Fund is another initiative that supports “export-focussed business growth”. Exports from the UK have also been given a boost from the fall of the stirling after the UK voted to leave the EU in 2016. “The weak sterling has benefitted exporters,” says Durlacher. “The government is forecasting by 2020 an increase of 22% in exports for the UK. That benefits areas in the UK which have focused on manufacturing and exports.”

The north of England has traditionally been home to more manufacturing businesses than the south. A report in July by EEF, the manufacturers’ organisation, found that 15,000 new manufacturing jobs have created since 2010. That means roughly one in 10 people in the northwest now work in the sector. 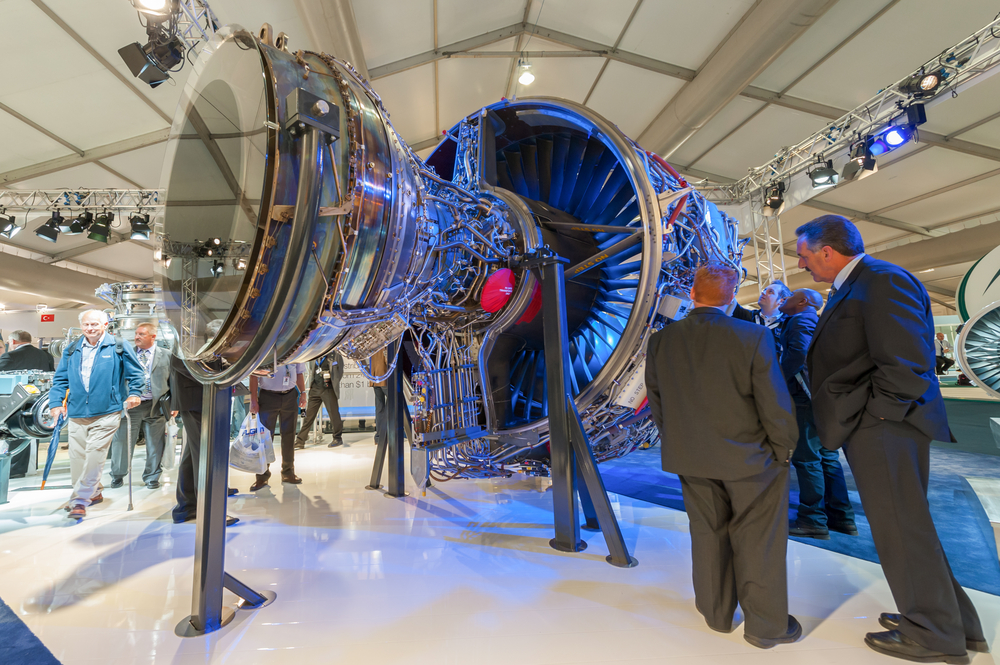 How should private banks enter the market?

These economic signals have not gone unnoticed by a host of national and international banks. In 2018 alone, PBI has counted nine major investments by private banks and wealth managers into the North of England (see table). This does not include Scotland or the multitude of smaller people hires and office openings that have gone on.

As with most expansion plans, these investments can be broken down into two categories: organic and acquisitions. 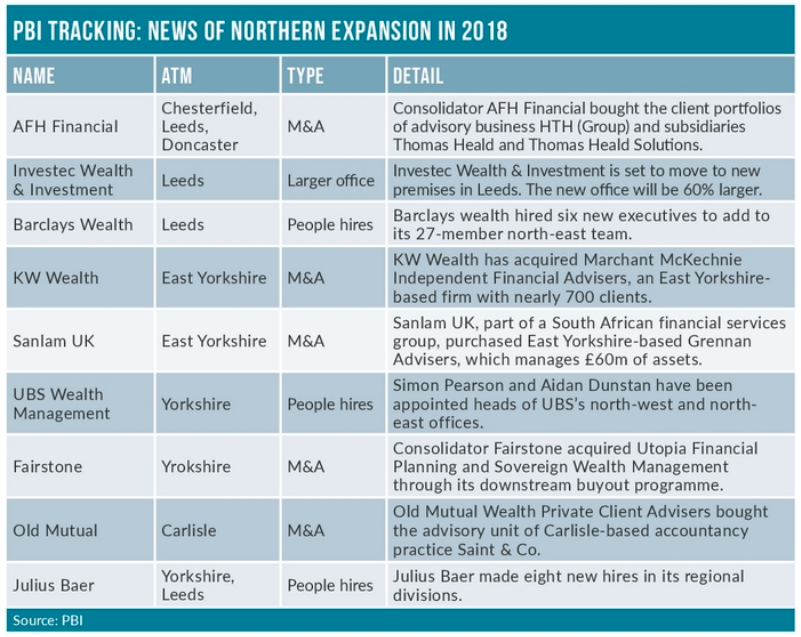 Wealth manager Sanlam UK took the latter approach and entered the Yorkshire market through the acquisition of Grennan Advisers earlier in 2018. Though financials of the deal were not disclosed, the size of the purchase is fairly typical: Grennan’s £60m of assets under management (AuM) are puny in comparison to Sanlam’s £5.3 billion.

But with few native wealth managers of significant size, it is relationships which count in the North. The Sanlam-Grennan deal meant that the latter’s founders, Stuart Grennan and Helen Chapman, would join Sanlam UK.

The value of long-term relationships is why Arbuthnot Latham has made a string of major hires in its Manchester office. “It is important that relationship managers and advisors in regional offices are conversant with the local business community and wider social matters,” said Fletcher. “Trust is harder to win regionally, but the loyalty lasts much longer.”

Julius Baer has also been hiring relationship managers to fill its northern offices, which are located in Leeds and Manchester. “The UK has been a location for Julius Baer for 50 of those 130 years [of the bank’s history] and for the majority of that time it has been a London based businesses,” says Durlacher.

Clearly this new wave of northern growth will see other London-centered private banks and wealth managers look north. The race for relationship managers and advisory firms is only just heating up. Expect to see more.