For the UK savings and investment market, 2018 was the worst year since the 2008 financial crash. The only year close was 2011, when the UK just escaped a double-dip recession. GlobalData’s UK Retail Savings and Investment Analytics estimates that the growth of retail assets was flat in 2018 compared to 2017 at exactly 0.02%. Although deposit balances were up 3%, this did not offset stock market losses. Stock markets globally closed 2018 on a bad note, and the UK was part of this crowd. As a result, UK retail direct equity and unit trust holdings decreased by -7% and -4% respectively. 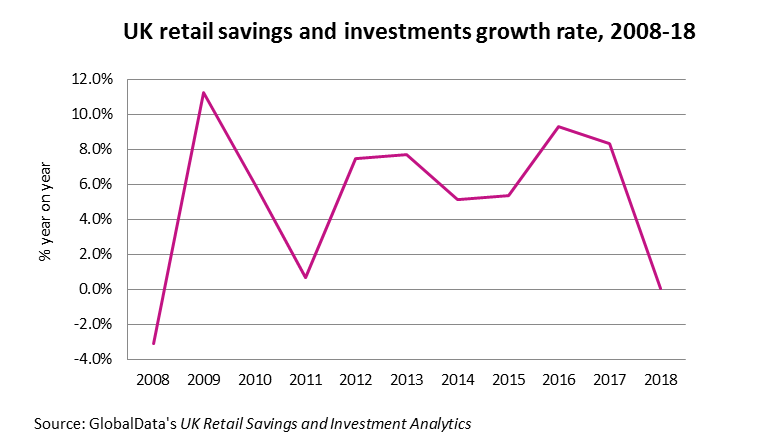 The ongoing uncertainty around Brexit spooked investors in 2018, but this was not the only political issue to play a part in causing the FTSE 100 to suffer its worst year since the financial crash. Shortly after the Brexit referendum, the weakening pound played in favour of the exporters that constitute a large share of FTSE 100 companies. But this effect weakened throughout 2018, and anxieties around the continuing US-China trade war and overall global sentiment contributed to the UK stock market’s decade low.

This has hit UK retail investors who were holding their assets either directly on the stock market or in equity funds in hope of good returns. Bank deposits (including cash ISAs) still make up almost half of retail investors’ portfolios in the UK, although our data suggests the returns they offer are not considered attractive. Net inflows into retail deposits in 2018 were the lowest since 2011. August 2018 saw the Bank of England raise the base rate from 0.5% to 0.75%, but rates offered by banks to consumers remained largely unchanged.

Since 2018 ended, not much has changed regarding political uncertainty. The UK is set to leave the EU on March 29, 2019 – but whether it is with or without an agreement remains to be seen. In addition, US President Donald Trump’s trade war continues to intensify. Upset about recent stock market performance, in the current climate investors might be willing to shift their assets to safer products. The onus is on advisers and wealth managers to stay acute to any political and economic change in order to adjust client portfolios and yield the desired returns.