GlobalData, a leading data and analytics company, has revealed its global league tables for legal advisers by value and volume for the first quarter of 2020, which witnessed subdued deal activity worldwide due to coronavirus (COVID-19).

The American law firm advised on 33 deals worth $84.2bn, including a major transaction during the period – Aon’s acquisition of Willis Towers Watson for $33.4bn.

GlobalData has published a top 20 league table of legal advisers ranked according to the value of announced M&A deals globally.

Latham & Watkins took the second place with a total deal value of $81.6bn. In third position was Sullivan & Cromwell, which worked on 34 transactions worth $77.0bn.

Freshfields Bruckhaus Deringer and Kirkland & Ellis secured fourth and fifth positions, having worked on 19 deals worth $71.1bn and 103 deals worth $65.9bn, respectively.

Aurojyoti Bose, Financial Deals Analyst at GlobalData, comments: “In terms of deal value, Skadden Arps Slate Meagher & Flom (Skadden) emerged as the top legal adviser in Q1 2020 despite advising on relatively lesser number of deals compared to its peers. On the other hand, Kirkland & Ellis, which held the top spot in terms of deal volume, stood at the fifth position in value terms. Interestingly, eight of the top 20 advisers (by total deal value) including Skadden advised on $33.4bn Aon – Willis Towers Watson merger deal.

“Globally, overall M&A Activity dropped both in value and volume terms in Q1 2020 compared to the previous quarter as well as Q1 2019, which could also be attributed to COVID-19 concerns. According to an insight on impact of COVID-19 on M&A by Skadden released on March 18, 2020, the firm stated that COVID-19 crisis outbreak is continuing to affect M&A activity. However, it also states that companies with higher risk appetite continue to pursue M&A deals.” 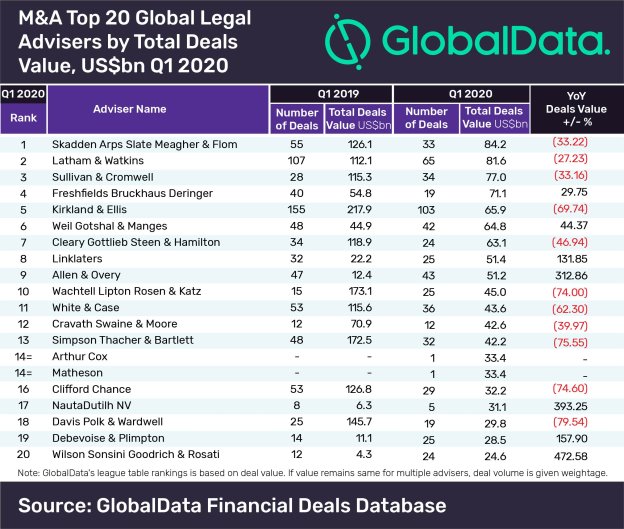 Kirkland & Ellis has secured number one position in the latest global M&A legal advisers league table based on deal volume in Q1 2020.

According to GlobalData, the American law firm advised on 103 deals worth $65.9bn, including a major transaction during the period – Thyssenkrupp’s $18.7bn sale of elevators division.

DLA Piper and CMS secured fourth and fifth positions, having worked on 57 deals worth $9.2bn and 48 deals worth $0.9bn, respectively. 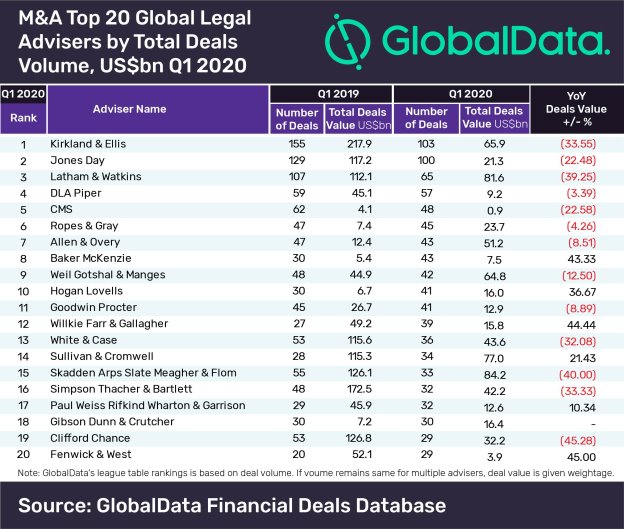