GlobalData, a leading data and analytics company, has revealed its global league tables for financial advisers by value and volume for H1 2021.

JP Morgan tops by both value and volume

JP Morgan was the top financial adviser for mergers and acquisitions (M&A) deals by both deal value and volume for H1 2021, having advised on 257 deals worth $633.3bn.

Goldman Sachs occupied the second position by both deal value and volume with 252 deals worth $616bn.

GlobalData lead analyst Aurojyoti Bose said: “There was close competition between JP Morgan and Goldman Sachs for the top position as these were the only two firms that managed to advise on more than 250 deals, while also surpassing the $500bn mark. Interestingly, both JP Morgan and Goldman Sachs also advised on more than 100 deals worth greater than or equal to $1bn.

“However, JP Morgan edged past Goldman Sachs due to its involvement in megadeals (valued greater than or equal to $10bn). While JP Morgan managed to advise on 12 megadeals, Goldman Sachs advised on 11 such deals and lost the top position to the former by a whisker.”

Rothschild & Co secured the third spot by volume with 197 deals worth $100.4bn. It was followed by PWC with 187 deals worth $32.6bn. Morgan Stanley got the fifth position by volume. 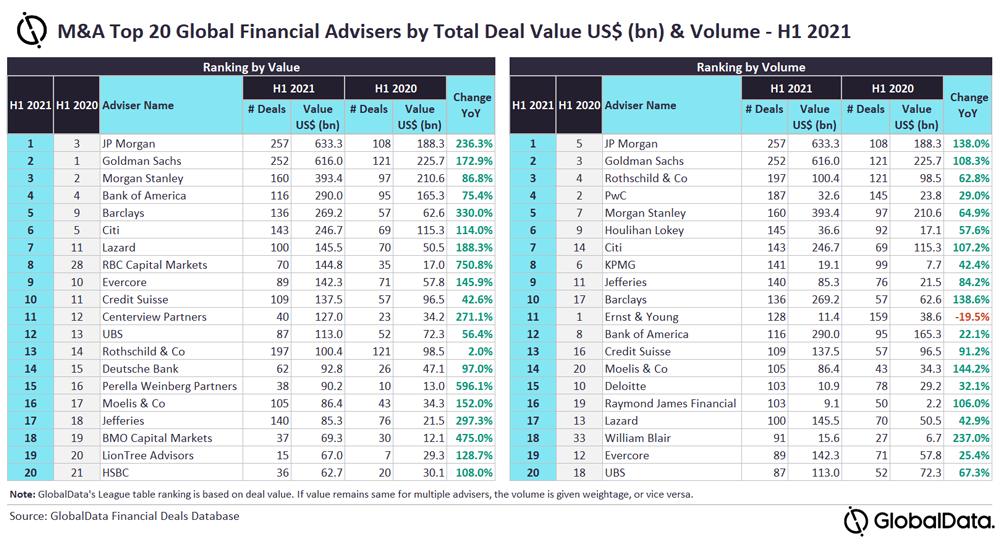