Facebook faces government scrutiny for its new cryptocurrency Libra, which could pave the way for wider-spread regulation and a boost for the crypto market.

This is the opinion of Nigel Green, founder and CEO of financial advisory organisation, deVere Group.

“The high-profile scrutiny of this new cryptocurrency must be championed as cryptocurrencies are already part of the global financial system,” Green says.

“This is a step in the right direction for establishing a robust global regulatory framework for the wider crypto market.”

Facebook representatives will appear in front of the senate today to address the concerns of the US government over the use of cryptocurrency for crime and money laundering given the social media company’s chequered history with privacy.

Green concludes: “Whatever you think about Facebook’s Libra as an individual cryptocurrency, these top-level US governmental hearings underscore again that, as a concept, digital, global, borderless currencies are now a part of mainstream finance, and increasingly so.

“Last week President Trump raised the issue of Bitcoin, with the effect of making cryptocurrencies become a presidential issue.  The hearings this week will make them a global policy issue.”

This refers to President Trump last week tweeting his disapproval of Bitcoin, Libra and other digital currencies, saying they are “not money” and “based on thin air”. He added that Libra “will have little standing or dependability”. 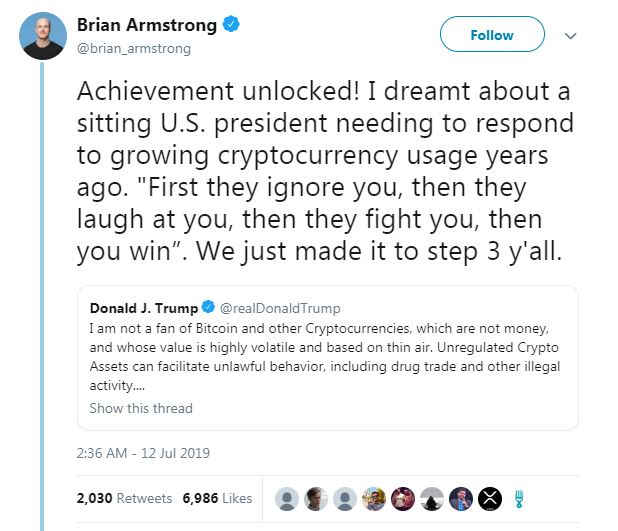 Brian Armstrong, CEO and co-founder of crypto exchange Coinbase, tweeted in response: “Achievement unlocked! I dreamt about a sitting US president needing to respond to growing cryptocurrency usage years ago. ‘First they ignore, then they laugh at you, then they fight you, then you win’. We just made it to step 3 y’all.”

The tweets from President Trump followed a comment from Fed chairman Jerome Powell, describing Bitcoin “an alternative to gold”, and “a speculative store of value”, something else crypto-bulls will interpret as a positive endorsement.

Topics in this article: Bitcoin, cryptocurrency