GlobalData, a leading data and analytics company, has revealed its league tables for top 10 financial advisers by value and volume in the Middle East and Africa (MEA) for in its report,  ‘Global and Middle East & Africa M&A Report Financial Adviser League Tables Q1-Q3 2020’.

Bank of America and Moelis & Co top by value

As per GlobalData’s ranking, Bank of America and Moelis & Co shared the top position in terms of disclosed value by advising on three deals worth $10.1bn.

Morgan Stanley occupied the third position with two deals worth $10.1bn, followed by First Abu Dhabi Bank and Mizuho Financial Group with a single deal each worth $10.1bn.

Citi led in terms of volume having advised on seven deals worth $8.2bn.

GlobalData financial deals analyst Aurojyoti Bose said: “Citi, despite advising on more than double the number of deals advised by Bank of America and Moelis & Co, lost the top position by value to the latter. Bank of America and Moelis & Co managed to advise on one mega deal (Deal valued more than or equal to $10bn). Citi also advised on four deals worth greater than or equal to $1bn but lacked any mega deals.” 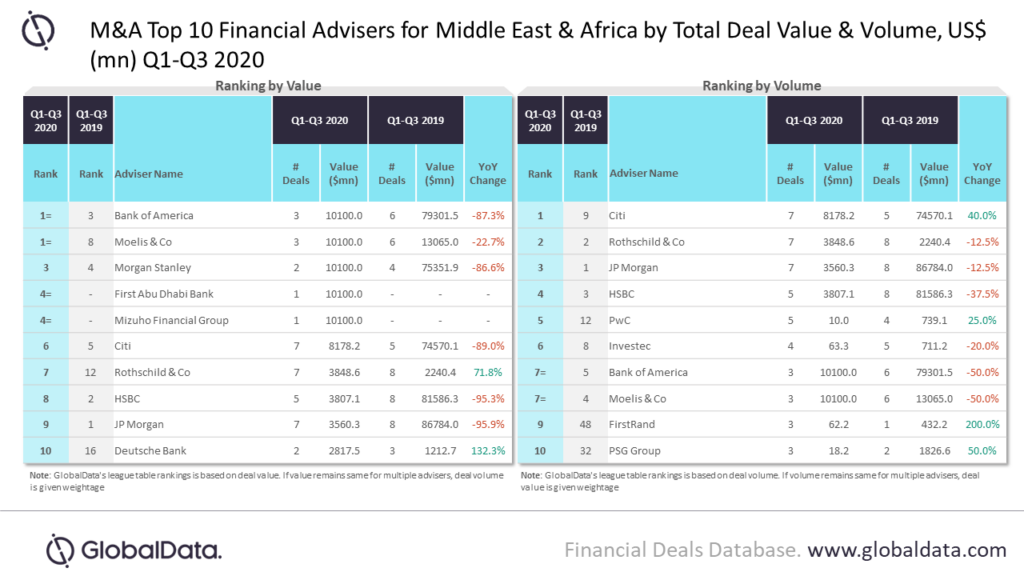