Goldman Sachs was the leading financial adviser globally for mergers and acquisitions in 2019, according to GlobalData.

GlobalData has published a top 20 league table of financial advisers ranked according to the value of announced M&A deals globally.

Goldman Sachs and Rothschild & Co led the chart in terms of volume, advising on 339 deals and 331 deals, respectively in 2019. 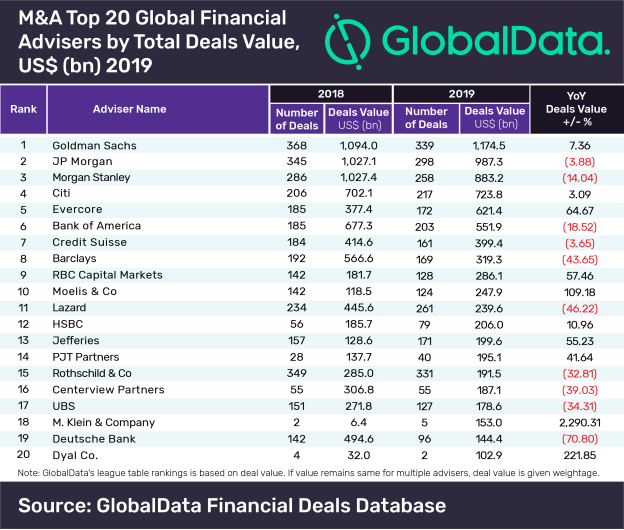 Ravi Tokala, financial deals analyst at GlobalData, said: “Goldman Sachs, with a 7.36% growth in value terms compared with 2018, emerged as the clear winner both in terms of value and volume. Among the 36 megadeals (>$10bn) recorded during 2019, the American investment bank advised on 25 deals and crossed $1tn worth of deals, maintaining a significant lead over the rest of the top 20.

“The value of the deals handled by JP Morgan and Morgan Stanley went down by nearly 3.88% and 14.04%, despite advising on 18 and 15 megadeals, respectively.”