GlobalData, a leading data and analytics company, has revealed its global league tables for financial advisers by value and volume for the first quarter of 2020, which witnessed subdued deal activity worldwide due to coronavirus (COVID-19).

Goldman Sachs has dominated the latest mergers and acquisitions (M&A) league table of the top 20 financial advisers based on deal value in Q1 2020.

The American investment bank advised on 63 deals worth $180.3bn, including the big ticket deal of Aon’s acquisition of Willis Towers Watson.

GlobalData has published a top 20 league table of financial advisers ranked according to the value of announced M&A deals globally.

JP Morgan took the second place with a total deal value of $131.1bn from 46 deals it advised during the period.

Rothschild & Co and Credit Suisse secured fourth and fifth positions, having worked on 65 deals worth $66.3bn and 21 deals worth $57.3bn, respectively.

Ravi Tokala, financial deals analyst at GlobalData, said: “Goldman Sachs and JP Morgan are the only two advisers which crossed $100bn mark in Q1 2020, in value terms, maintaining a significant lead over rest of the advisors in top 20. 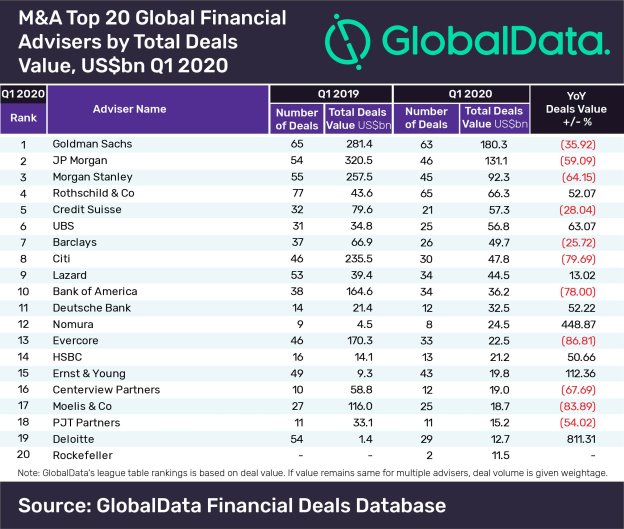 Rothschild & Co has dominated the M&A league table of the top 20 financial advisers based on deal volume in Q1 2020.

According to GlobalData, the UK-based investment bank advised on 65 deals worth $66.3bn, including the big ticket deal of Thyssenkrupp’s $18.7bn sale of elevators division.

JP Morgan and Morgan Stanley secured fourth and fifth positions, having worked on 46 deals worth $131.1bn and 45 deals worth $92.3bn, respectively.

Ravi Tokala said: “In terms of deal volume, Rothschild & Co emerged as the top financial adviser in Q1 2020. However, the UK based investment bank settled at 4th rank in value terms due to its involvement in only two megadeals (>US$10bn) and low-value transactions. 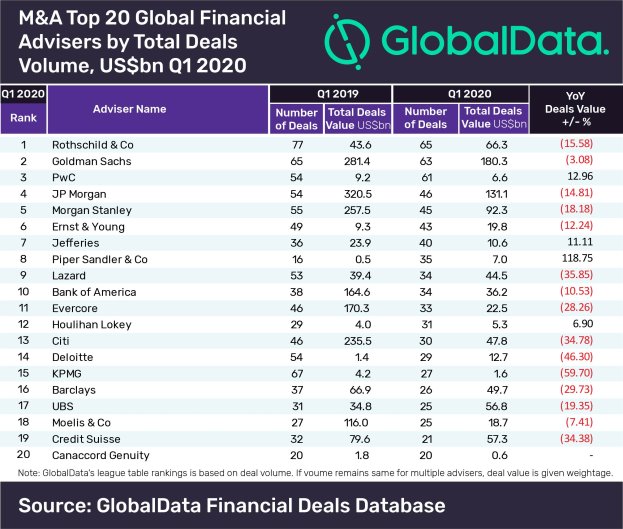