As world leaders descend on the Swiss town of Davos this week for the World Economic Forum, Mishelle Thurai asks if the country can retain its appeal among the wealthy international set.

Thank you.Please check your email to download the Report.

Switzerland continues to be one of the world’s most prosperous economies. While its GDP grew by 1% in 2017, figures show that the final quarter of 2017 resulted in a 0.65% growth, the highest quarter-on-quarter increase since 2014.

Strong financial and manufacturing sectors have contributed to this economic boost. A weakening Swiss franc and an international demand for Swiss products – including luxury watches and pharmaceuticals – has helped increase exports. But there are concerns that strained relations with its neighbours – particularly the EU – and declining international appeal might have negative consequences for the wealth management sector in 2019.

With a population of just 8.5m adults and GDP figures comparable to neighbouring European countries, Switzerland ranks as having one of the largest GDP-per-capita figures in the world. Swiss private banks therefore have a ready market of high net worth and affluent individuals at home.

GlobalData’s Wealth in Switzerland: Sizing the Market report found that Swiss HNWIs accounted for 2% of the total population in 2017, while mass affluent individuals – those with between $50,000 and $1m in onshore liquid assets – account for an astonishing 69%.

But this wealth division is set to shift in the next five years, says GlobalData. The proportion of mass affluent individuals will decrease by 2% in the five years between 2017 and 2022. However, GlobalData anticipates a 12% increase in emerging affluent individuals – those with between $25,000 and $50,000 in onshore liquid assets – over the same period. This is largely due to a combination of a stock market slowdown and rising salaries among the country’s middle class. 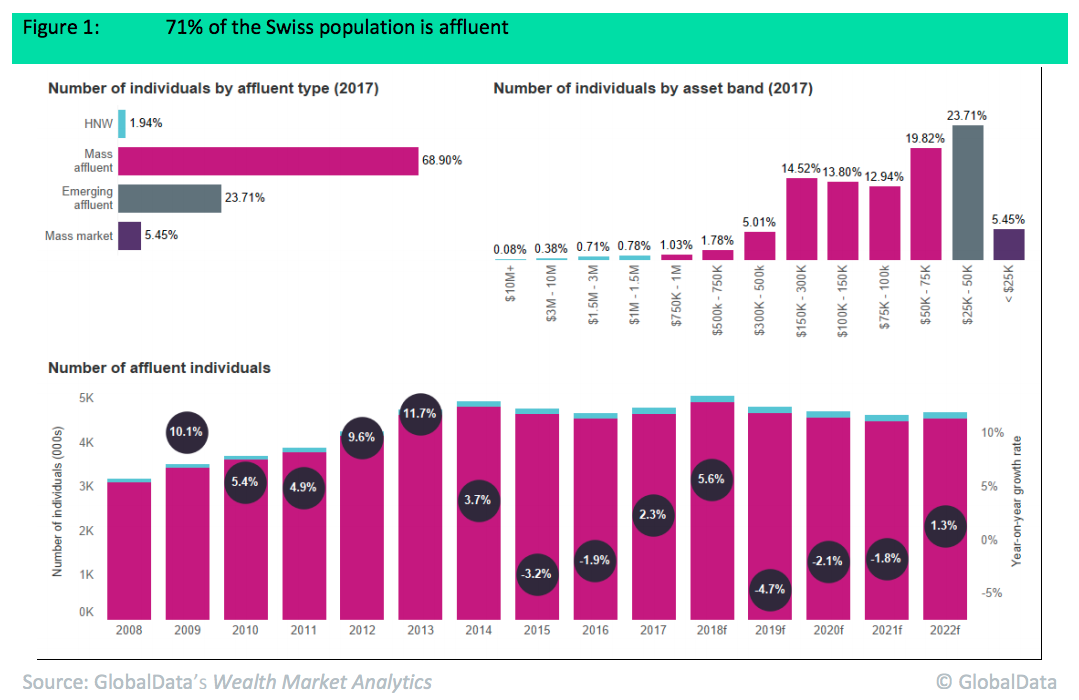 According to GlobalData’s report, most Swiss HNWIs hold the majority of their assets in traditional liquid classes such as deposits and equities. However, wealth managers also need to be aware that approximately 21% of HNW assets are in illiquid assets.

The data suggests that demand for illiquid assets is falling though. Property is one area that is seeing a decline in HNWIs assets. Even though low property prices present an attractive investment opportunity, it seems that perception of safety is a major driver for Swiss HNWIs. Their cautiousness is likely to outweigh any potential capital appreciation opportunities of Swiss property.

30% of assets are offshore

There is a growing desire among Swiss HNWIs to invest beyond their alpine homeland. According to GlobalData, 29.5% of HNW assets are now held outside of Switzerland.

While general geographic diversification is the main reason for Swiss HNWIs to take their money abroad, there are a number of other factors driving this capital flight.

Following the decision of the Swiss National Bank (SNB) to de-peg the franc from the euro in 2015, the value of the currency soared as overseas investors rushed to buy what they saw as a safe denomination. The SNB has since encouraged investors to put their money abroad in an attempt to weaken the franc and encourage exports.

Germany is the preferred booking centre for offshore wealth. The two countries have a close relationship aided by proximity, language (at least for the German speaking side of the country) and Frankfurt’s well-developed stock exchange.

The UK and the US are also attractive hubs for offshore investments. Though Brexit remains a concern as current relations between the UK and Switzerland lie with bilateral agreements between Switzerland and the EU.

During the two year transitionary period after Britain leaves the UK (which is currently set to run from 29th March 2019 to 31st December 2020, depending on the outcome on UK parliament’s vote on the withdrawal agreement) the Switzerland-EU bilateral agreements will continue to apply to the UK. Yet after this period new agreements will have to be created which could affect Swiss investments in the UK.

Switzerland has outlined how it might maintain a close relationship with the UK in its ‘mind the gap’ policy drawn up in 2016. In this strategy, “The Federal Council pursues the ‘Mind the Gap’ strategy independently of the framework of the Swiss-EU relationships which are for Switzerland of fundamental importance,” the document says.

The Swiss Federal Department of Foreign Affairs (FDFA) recently released a Brexit factsheet stating that there have been agreements made regarding Switzerland and the UK. These will apply after the end of the transitionary period when bilateral agreements between Switzerland and EU are no longer valid for the UK. This should provide some optimism for HNWIs with offshore investments in the UK, as Switzerland will be sure to maintain a close relationship with the UK regardless of the type of deal agreed (or not agreed) with between Britain and the EU. 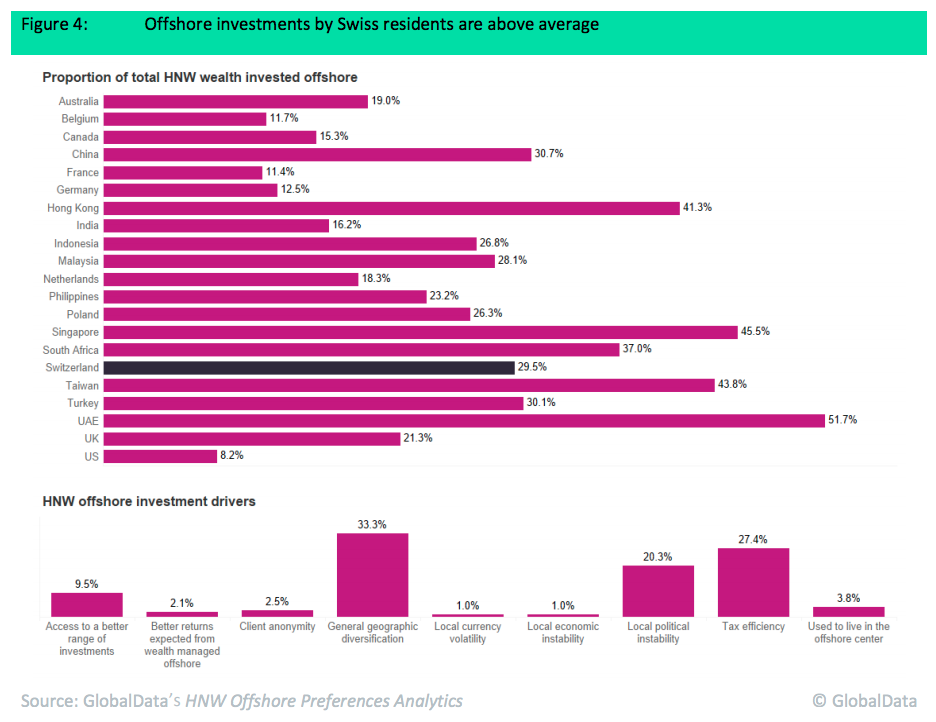 But Swiss investors are keeping a close eye on Brexit for another – and potentially more critical reason. The ‘equivalence’ arrangement that allows EU investors to trade on Swiss exchanges and vice-versa might come to an end if Switzerland does not agree to a new ‘institutional agreements’ put forward by the EU. This would mean that Swiss HNWIs might only be able to access EU stocks – including their favoured Frankfurt Börse – through local brokers

The decision on the institutional agreements – which the EU originally asked Basel to ratify in December – has now been postponed for six months as authorities hold a public consultation. At the centre of this contentious debate is the protection of local high wages in Switzerland: The EU wants the end of ‘flanking measures’ which require EU companies to register eight days before sending workers to Switzerland as well as other freedom of movement measures.

If Switzerland rejects the ‘institutional agreements’ and ‘equivalence’ is withdrawn following the consultation then private banks will need to re-think how they offshore their clients’ portfolios. Trading in EU equities will suddenly need to be brokered through local banks in the EU. Shares in Swiss stocks, such as Nestlé, Novartis and Roche, could also be affected if EU citizens withdraw their funds from Swiss exchanges.

However, an unintended outcome could be more alignment between Britain and Switzerland if both countries succeed in distancing themselves from Brussels. Around a third of Swiss blue-chip stocks are traded on London-based venues. “Most of the foreign business with Swiss equities is taking place via London and from there a lot of business could come back to Switzerland despite Brexit,” Luzernerzeitung, a daily Swiss newspaper reported.

Swiss HNWIs will be closely watching the Brexit process over the next year as it affects their own alignment with Brussels. Private banks and wealth managers will have to be reactionary.

Though Swiss HNWIs are concerned about the continued ability to offshore their wealth, it is foreign HNWIs placing their money in Switzerland which have earned Swiss private banks profit as well as worldwide recognition. But the secrecy and tax advantages of offshoring wealth in Switzerland came to an end in 2018, further questioning the future of the industry.

The long-lasting Swiss banking secrecy ended in October last year as the Federal Tax Administration (FTA), the Swiss tax agency, started exchanging bank account data with tax authorities in other countries for the first time in an effort to curb tax evasion.

Under the data swap agreement, financial institutions registered with the FTA collected data on millions of accounts and sent them to the tax agency. In turn, FTA sent data on around two million accounts to partner states including European Union countries, Australia, Canada, Guernsey, Iceland, Isle of Man, Japan, Jersey, Norway, and South Korea.

In spite of this, and in another gripe with Brussels, Switzerland was placed on the EU’s ‘grey list’ of ‘non-cooperative jurisdictions for tax purposes’ in 2017. The effect this will have on investors is uncertain since there are no penalties associated with the colour coding. However, it will make global wealth managers aware of any further tax transparency pressures that could jeopardize clients’ investment or exposure.

If Swiss stocks suffer due to this or the ending of equivalence, it will only add another reason for foreign HNWIs to withdraw their funds from the country. A Swiss private banking sector that is absent of secrecy, tax efficiency and is unable to offer the type of returns clients expect, will need to re-invent itself in order to continue attracting foreign wealth.

Differentiation of Swiss private banks and wealth managers is clearly required. Heritage cannot be the only thing to draw HNWIs to Geneva or Zurich. Innovation is also needed as forward thinking wealth managers will appeal to HNWIs wherever they are.

But in Switzerland there is often innovation in heritage if not a heritage of innovation. As Ian Woodhouse, head of strategy and change at Orbium told the audience of PBI Switzerland in December: “The Toblerone is a great example of Swiss private banking. If you can differentiate chocolate you can differentiate anything”. Swiss private banks need to look back to look forward and now more than ever.