While offshore investments are more prominent in the HNW space, with 32.5% of HNW wealth booked abroad, increasingly easy access to overseas markets is also driving more retail wealth abroad. Data from our 2020 Banking and Payments Survey shows that one in 10 consumers have an offshore account or hold investments abroad. Going forward, we expect this proportion to rise as investors aim to escape economic instability in their home country. Younger generations will also be more fond of holding wealth abroad.

On a global scale 16.4% of offshore investors quoted economic or political instability as the main driver behind them offshoring wealth.

However, this proportion jumps to 37.5% in Argentina, 27.6% in Nigeria, and 25.0% in Russia. It is in these countries – as well as those that are struggling with the economic impacts of COVID-19 more severely, such as Brazil, South Africa, and Turkey – where we expect a pronounced rise in demand for offshore investments. While the COVID-19 pandemic – as per the definition – is global in nature, the economic impacts vary between geographies, with poorer and less developed nations more severely affected.

On the other hand, we do not only see notable differences between geographies but also between consumer segments, with younger generations significantly more likely to channel wealth abroad.

For example, 16.1% of millennials have an offshore account, compared to only 3.6% of baby boomers. It is also younger generations who are more concerned about the effects of an economic downturn on their wealth, with 2.5 times more offshore investors in the 25–34 age bracket quoting economic conditions as an offshore driver than the 65+ segment.

This is in line with findings from our COVID-19 Tracker Consumer Survey, which show that younger consumers are more concerned about the global outbreak of coronavirus. As of March 25, 68% of those aged between 25 and 34 indicated they were either “slightly concerned” or “strongly concerned,” while only 55.6% of those in the 65+ age bracket indicated concern. Being able to facilitate access to offshore markets is critical to appeal to younger generations as they are looking to shelter their wealth abroad. While international trade may be suffering due to the pandemic, international banking clearly is not. 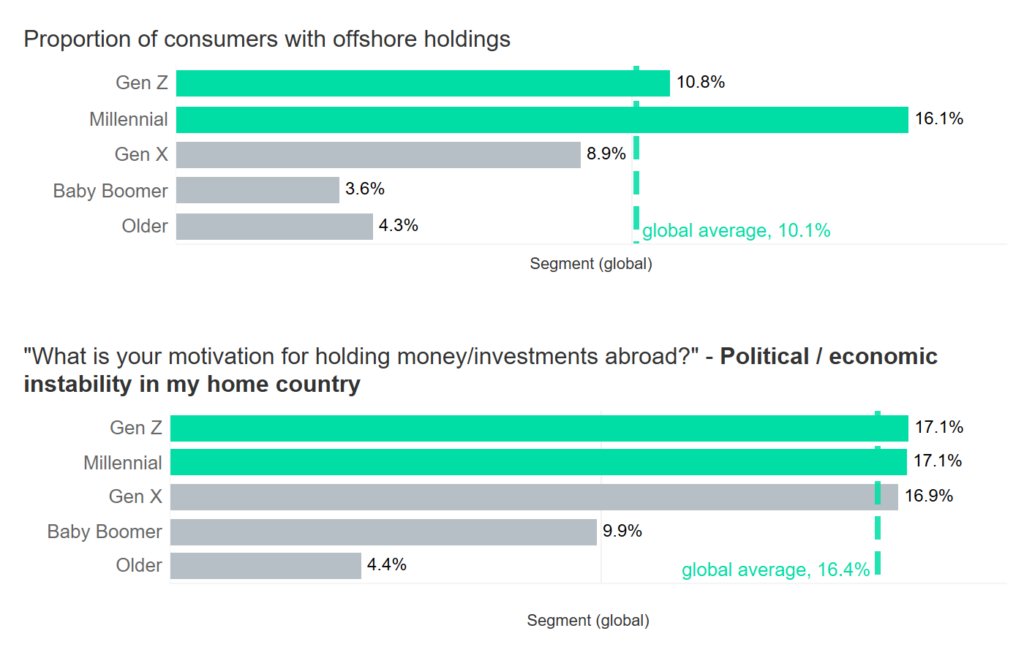