The wealth management industry in centuries old and has kept many of its traditions. Digital has infiltrated many arms of the financial sector, but a lot of the private banking industry remains resistant. How much longer can this go on for? Patrick Brusnahan reports

Boston Consulting Group (BCG) has released a report, The Future of Wealth Management – A CEO Agenda, looking at the future of the industry.

According to the report, the industry’s profit is a concern as it doesn’t seem to be growing at any real rate. There is a larger asset and client base now, but profit for the industry lies at $135bn in 2019, only $5bn more than in 2007.

On the future of private banking, Schuyler Weiss, Alpian CEO, tells PBI: “Historically, personalised wealth management services have been reserved for the high-net-worth segments of banking clients, and for everyone else they have been out-of-reach or overpriced. Today, more and more clients, especially those in the affluent segment, are looking for simple and accessible ways to interact with their bank or wealth manager, and modern technology is allowing pioneering companies to close those service and price gaps.

“But technology solutions alone are not enough. There is a clear need to pair cutting-edge technology with the support of human advisors to provide an optimal level of service and trust while also facilitating quality at scale. This is something that we are keeping front of mind at Alpian as we develop one of the first digital private banks. As the world recovers from the impacts of COVID-19, any company that can deliver an excellent service with a fair, transparent cost will benefit, and previously underserved clients will reap the rewards of personalised wealth management.”

According to the report, personal financial wealth has close to tripled in the last 20 years, from $80trn in 1999 to $226trn at the end of 2019. This is something of which the wealth management sector must take advantage.In addition, wealth distribution has spread with the share of global wealth held by emerging markets increasing from 9.3% in 1999 to 25.3% in 2019.However, millionaires are staying strong. The number of millionaires (in US dollars) has gone from 8.9 million in 1999 to more than 24 million in 2019. Furthermore, millionaires now hold more than 50% of total financial wealth globally.

North America has the largest number of millionaires (16.4 million) and more than half of them became millionaires during the 21st century.

Anna Zakrzewski, managing director and partner at BCG, said: “Effectively serving the world’s wealthy is going to get far more complicated in the years ahead. As the demographics of wealth shift, so will the needs and expectations of wealth clients. In addition, the disruptive forces that emerged at the beginning of the century are accelerating.

“As digitisation lowers barriers to entry to wealth management as a business, competition will intensify and offerings that once provided differentiation will face commoditisation.” 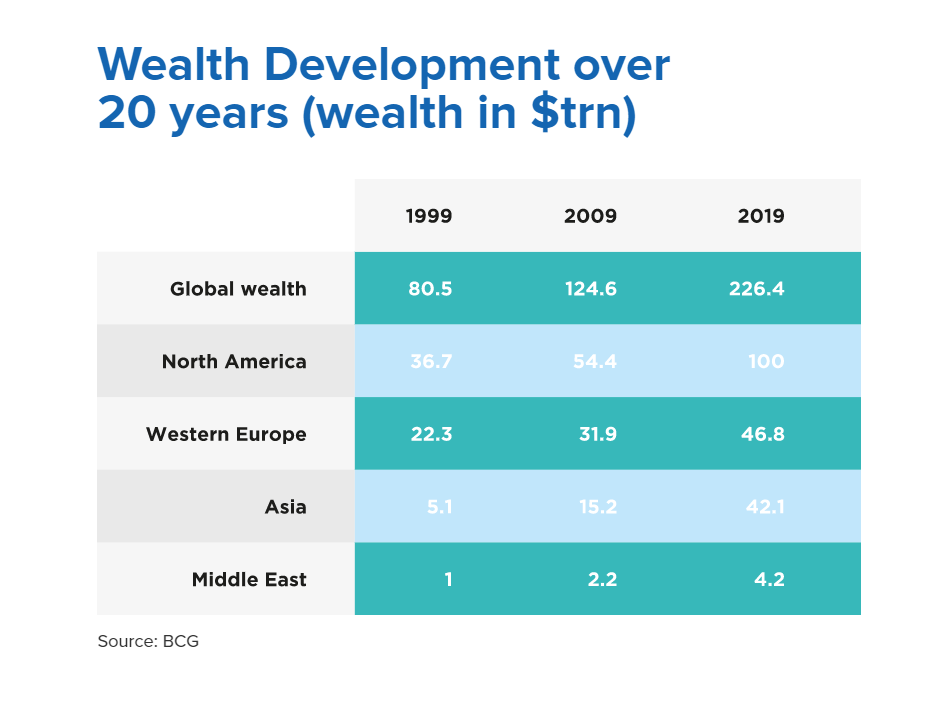