Jamie Crawley looks at private banking and wealth management in the Nordics, where a growing mass-affluent client base, the prevalence of sustainable investing and a promising tech scene are challenging traditional players.

The Nordic countries of Denmark, Norway, Sweden and Finland have long had a reputation for being among the mostly sternly liberal economic environments in Europe, with high tax rates and a strong welfare state helping to redistribute wealth.

The current economic outlook in Scandinavia looks largely positive with a thriving environment for innovation and an enthusiastic approach to sustainable investing.

The Nordic countries would certainly appear to be conducive to investment, with Sweden, Norway and Denmark ranking 12th, 7th and 3rd respectively for their ease of doing business, according to World Bank’s 2019 report.

Furthermore, in technology and innovation, Sweden and Denmark came first and second in the European Commission’s 2018 Innovation Union Scoreboard.

According to the EC, Denmark performs notably well in linkages, entrepreneurship and intellectual assets. Sweden’s technology scene is also distinctive, of which more on later.

High-net-worth clients in the Nordic countries are among the most loyal in Europe. Swedish HNWIs work with an average of 3.4 wealth managers, against the continent’s 4.1 average. This is visible to a slightly lesser extent in Norway, where the figure stands at 3.7, according to GlobalData, which surveyed the region’s wealth managers.

This could be attributed to the homely sort of service that banks and wealth managers adopt, as Månsson explains.

“We are a lot more family-orientated in our approach than other countries. What we do is really try to engage with the younger generations and we try to educate them on business and estate management and so on.”

The Nordic countries are well-known for their high top levels of income tax, which amounts to 57% in Sweden and 55% in Denmark, with Norway the outlier at 39%.

This could suggest that areas like philanthropy and impact investing are less of a concern for Swedish and Danish HNWIs who will believe their social obligation is comfortably taken care of already.

According to the OECD, for example, Denmark is one of the world’s biggest spenders on healthcare and social welfare, accounting for 28.7% of GDP in 2016.

However, sustainable investing and ESG appears to be particularly prominent in the wealthy’s mindset in these countries.

Sweden’s main state pension fund, for example, cut tobacco, coal and oil sands from its portfolios in the past year. Norway’s sovereign wealth fund, one of the world’s largest thanks to the country’s oil reserves, is now completely divesting its oil and gas shares.

“I think sustainable investing is more prominent in the Nordic countries than elsewhere,” says Månsson.

“There’s a strong social aspect to the privilege of being wealthy. Everyone wants to do something with a positive social impact and our clients are interested in knowing how they can make a difference in the world, helping to clean up plastic in the ocean and so on.

“That might not be something HNWIs necessarily talk about with their private bank in the UK or other countries, but it’s very common here.”

According to GlobalData, offshoring of wealth is a prominent factor in the Nordic wealth landscape.

Sweden’s HNWIs are more prone than most to offshore investments – around 40% of portfolios are held offshore. However, this has little to do with the country’s high tax on personal income, says GlobalData. More common factors are concerns over economic stability and the weak krona.

In short, Sweden’s HNWIs invest in markets like the US, UK and Germany because of the promise of strong returns that are unlikely to be matched at home. Better returns, local economic instability and currency volatility are all far more prevalent drivers for offshoring in Sweden than the European average.

Danish HNWIs, on the other hand, who offshore 12.1% of their wealth, are not ashamed to admit that tax concerns are prime motivations for taking money abroad.

It is worth pointing out that Denmark has been making a concerted effort to show that it is taking a stern approach to tax evasion. The Danish tax authority used data in both the Panama and Paradise Papers leaks to crack down on tax evasion and was an early adopter of the Common Reporting Standard (CRS).

Sweden has established itself as a technological hub, with the likes of Skype and Spotify being fine examples of Swedish companies that have become global leaders in their respective fields. Sweden is also recognised as one of the most conducive ecosystems for start-ups, tied with Los Angeles in fourth place in SparkLabs’ 2017 ranking, behind Silicon Valley, Tel Aviv and Beijing.

Sweden owes this position to its outstanding technical infrastructure, while its small size and population make it an ideal testing ground for new products.

According to GlobalData, 15.8% of HNWIs in Sweden owe their wealth to technology and telecommunications, one of the highest proportions in the world. 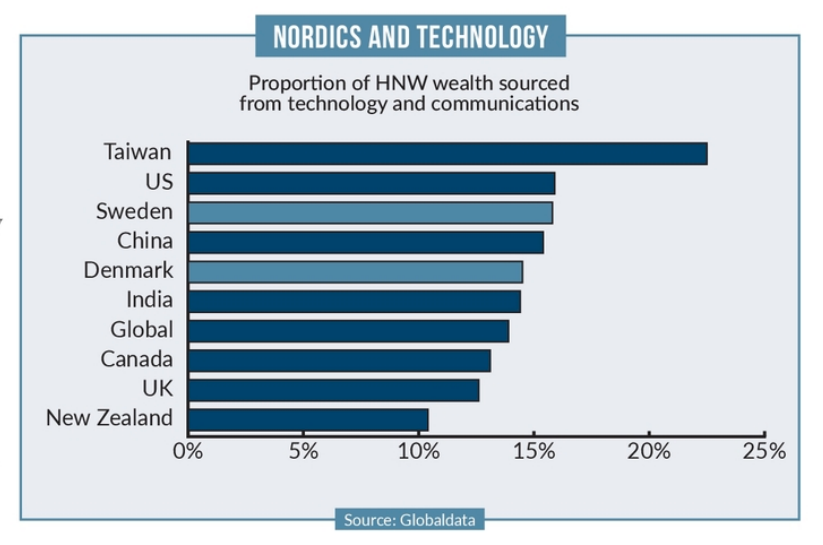 The prevalence of tech and innovation in Sweden points towards a heightened demand for digitally-centric wealth management offering. Sixty per cent of wealth managers believe they will lose market share to automated investment services in the short term.

“It can be challenging because Nordic banking is not at the forefront of digital transformation, but we do highlight its importance,” Månsson says. “We ensure to create a digital experience for our clients but we are quite far behind in this area.”

The numbers on this front are eye-opening. As of November 2018, only 33.4% of Swedish wealth managers offered an automated investment service, despite it being universally demanded by Swedish HNWIs.

This is replicated to a certain extent in Norway, where 76.3% of HNW investors seek an automated investment service, against 33.4% of wealth managers who currently offer one.

Wealth managers report that many HNW investors’ knowledge of financial markets is growing, and so the threat of robo-advisors and the like could be set to grow.

“Stockholm is certainly a tech hub, but not when it comes to wealth management,” Månsson sums up.

“This will have to change in the years to come.

“There is certainly demand for digital wealth solutions – not necessarily robo-advisors, but more hybrid solutions between automated investment and traditional relationship management.”