Private Banker International‘s second Germany conference took place in Frankfurt at the end of April. Oliver Williams chaired the event, which discussed the future of private banking in Germany.

After talks stalled between Deutsche Bank and Commerzbank, rumours have circulated concerning other potential suitors for Deutsche, the latest being UBS.

But a Deutsche marriage would just be the start of a series of mergers in Germany, Michael Kohl, managing director of Commerzbank AG told PBI Germany, “There is no clear market leader [in Germany]. Everything is quite segmented”.

The German market therefore needs consolidation to ward off competition, Kohl believes. “We talk about intensified competition. We have new entrants in the markets. Sale and loan banks are going further in their coverage – they are looking for HNWIs and UHNWIs. And then we have new offerings.” 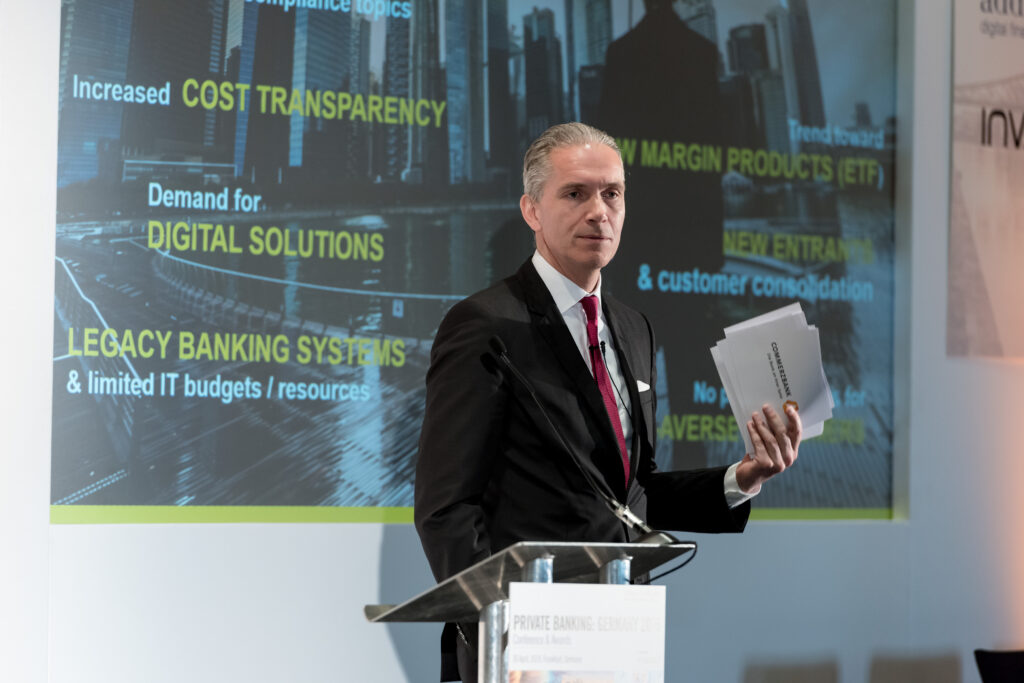 These “new offerings” include fintechs and their robo-advisory platforms. But he is also seeing French and UK banks entering the German wealth management market alongside their corporate clients.

Low barriers to entry in the wealth management sector, unlike the retail market where Deutsche and Commerzbank operate, mean pure-play wealth managers, like BNP, can easily set up.

While warding off competition, Germany’s wealth managers still have to make a return for their clients.

This is challenging given the current market outlook, which Gerit Heinz, global chief investment strategist at Deutsche Bank Wealth Management said was about growth deceleration but no recession. “That’s the key message for 2019.

“Stock markets are as high as they will be this year. But that does not mean you should go out of the markets completely.” 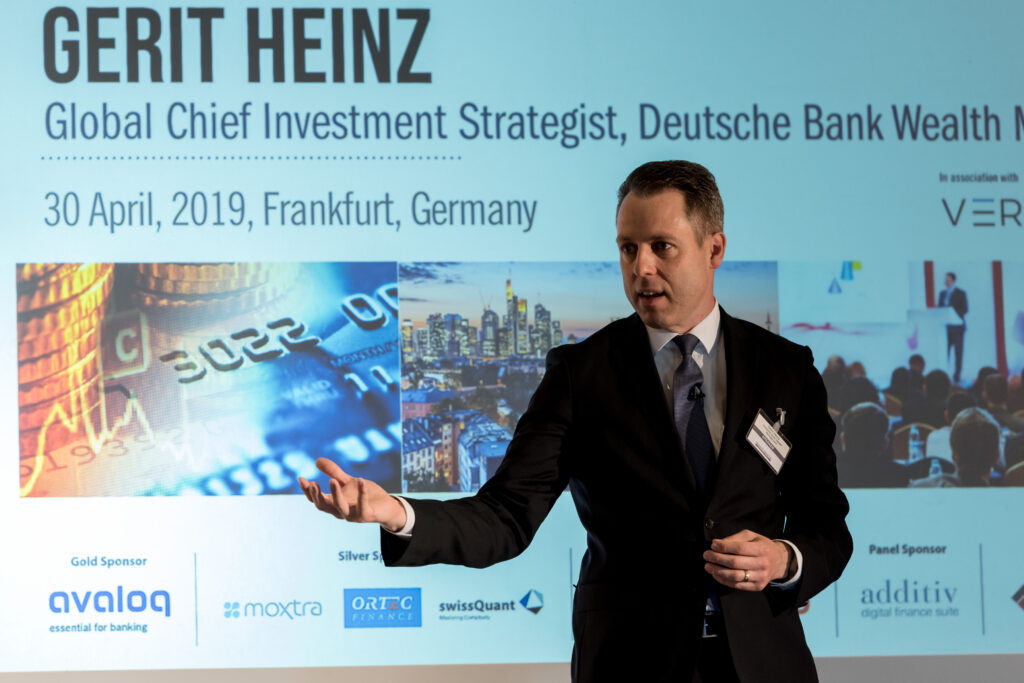 With German HNWIs currently allocating around 40% of their wealth to equities, according to GlobalData, that seems unlikely. However, it does open the door to other asset classes.

“We do see a shift towards real estate businesses,” said Kohl. Property currently makes up 10% of an average HNWI’s portfolio in Germany, GlobalData estimates. Wealth managers can expect this to increase.

When it comes to managing their wealth, there is a shift towards fee-based advising, he says. “There is a trend of clients to do it on their own.”

Managing intergenerational wealth is one of the largest issues facing private banks throughout the world. But in Germany, it’s more pressing than most places.

“The demographics require new solutions: 50% of our clients might have no successor so there is nobody to inherit; 25% to 30% of our depositors are leaving us because of people dying,” Kohl told PBI Germany.

Despite the best intentions of business owners to pass on their the family business, however, Kohl believes that their successors often think differently: “People no longer want to run their family business and want to sell it because the market is quite good”.

Up to 2,000 financiers are expected to relocate from London to Frankfurt by 2020 according to a study by Helaba, a German bank.

At least a dozen global banks, including UBS, Wells Fargo, Citi, JP Morgan, have all announced plans to increase their Frankfurt presence.

Frankfurt financiers at PBI Germany think not. “I think there have been a few more local hires and maybe some people have moved here [from London], but it’s not been a big movement”, said one.

Data shows this to be true. Though Goldman Sachs, Citigroup, JP Morgan, Morgan Stanley, Bank of America, UBS, Credit Suisse and Deutsche Bank posted a total of 1,545 jobs for bankers in Britain in January, just 301 were listed in Germany and France, according to Reuters.

Asked whether Germany could be considered a market leader in digital banking innovation, a panel comprised of Heinz and Kohl and joined by Christof Roßbroich from Avaloq and Leena Iyar from Moxtra, was clear on their answer: no. 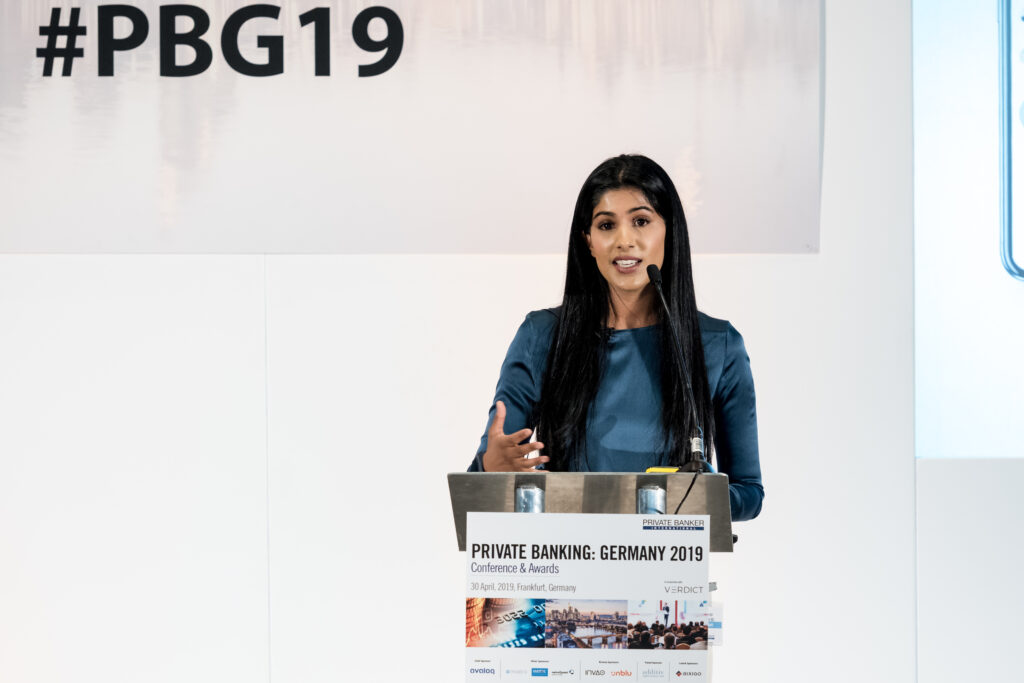 Germany falls behind Asia and Scandinavia when it comes to the use of robo-advisors and other fintech products. Even cash is still widely used in the country despite it’s near ousting in Sweden, 50 miles north of Germany’s seaboard.

Just 7% of German investors have used robo-advisors when arranging investments in the past year, according to GlobalData.

However, wealth managers believe it is only a matter of time before that changes. When GlobalData conducted its survey in mid-2018, 57% of Germany’s wealth managers thought they would lose market share to robo-advisors in the subsequent 12 months.

This fear has been compounded by several fintechs entering the German market in the last year. Moneyfarm, one of the largest with operations in the UK and Italy, acquired German peer vaamo in November.

Then, a month before PBI’s Germany conference, Goldman Sachs invested an undisclosed sum in Elinvar, a Germany-based wealth technology start-up.

Blockchain is another frontier for the German fintech market. According to a survey by de Vere, a financial consultancy, 68% of HNWIs in the US, UK, Japan and Germany, will invest in cryptocurrency over the next three years.

But as Frank Wagner, CEO and Founder, INVAO Group pointed out during PBI Germany, “Cryptocurrencies do not exclusively mean Bitcoin. And blockchain doesn’t necessarily mean crypto”.

To Wagner, “blockchain feels a lot like the internet did in the 1990s. Nobody knows quite how to figure it out, but everybody can see there is potential.”