A record number of people attended Private Banker International’s Switzerland conference and awards in December. That meant a diverse debate that ranged from Brexit to Bitcoins. Oliver Williams chaired the day’s proceedings.

In its third year, PBI Switzerland, the annual conference held in Zurich every December, was forced to address predictions from previous years.

Technology has not replaced private bankers and nor has Swiss private banking as an industry collapsed, said Tobias Wagner, head of the Zurich branch and member of the executive committee at Societe Generale. Both were predictions from previous PBI Switzerlands.

On the contrary, Wagner noted, “Switzerland still retains the same proportion of offshore assets as it always had.” The number of assets under management is growing and private banks are even struggling to attract talent given the overwhelming demand for bright bankers. 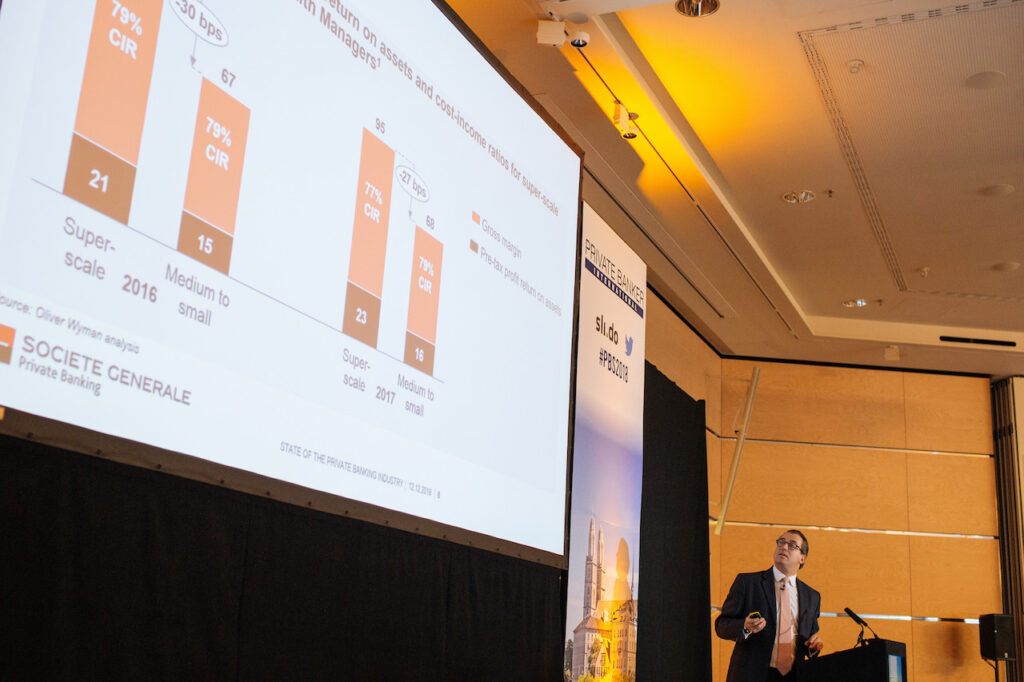 Offering all things to all people

That does not mean that the industry is immune from other pressures, said Wagner. Chief among them is the desire of private banks to offer, “all things to all people everywhere”; something Wagner calls “broad waterfront strategies.” Private banks with broad waterfront strategies struggle to differentiate themselves. Rather, banks should focus on their key competencies.

This is one of the ‘strategic levers’ Wagner advises banks to address to save their bottom line. Other levers include data analytics, transforming the workforce and preparing for a market downturn.

It is the latter of these that is most crucial. Banks that fail to mitigate against a market downturn will see as much as 12% decrease in their revenue.

Predictions were paramount in Salvador Vidal’s presentation. However, Vidal, who is head of marketing and client experience at BNP Paribas Wealth Management, made predictions of a different nature: “Am I able to predict the next product or service that my client will want?” asked Vidal before explaining how artificial intelligence (AI) can do exactly this.

More interesting though was Vidal’s example of how AI can foresee when clients might leave the bank. Unlike some areas of tech spending, in this example there is a clear return on investment “Every time a client leaves it takes roughly four months to recover from the asset loss. It takes eight months to recover from the revenue loss. Eight months is an eternity,” Vidal explained.

Using machines to sift through the data of clients that had previously left the bank, BNP was able to identify trends, said Vidal: “Somewhere between 13 and 14 months before the client leaves, something happens with the assets.

“First there’s a gradual drop then all the client’s assets go. It’s the same with inflows. Between three and four months they drop-off.”

By employing machine learning Vidal noted, bankers can be notified way in advance of a client leaving the bank. They can then identify the underlying reasons for client loss is another thing, however. 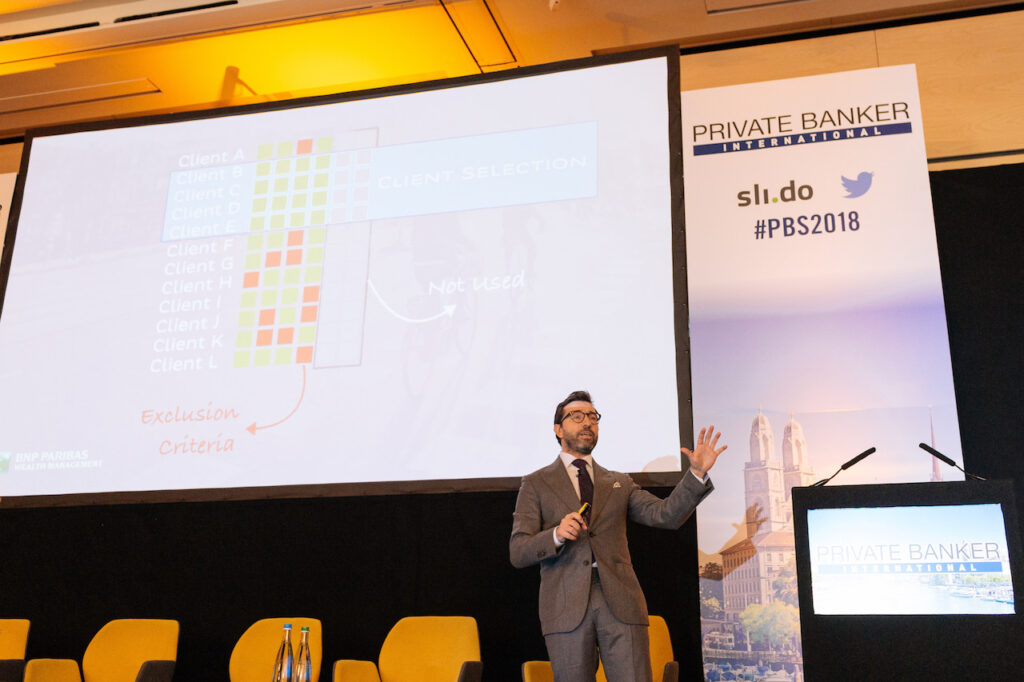 The direction of digital

Only 18% of wealth managers “believe they are really successful in digital transformation,” argued Michael Rogenmoser, chief market officer in Switzerland and Liechtenstein for Avaloq.

Axigo’s Mario Alves provided the audience with a real example of a Swiss private bank that adopted a wealth tech platform. A growing adoption of smartphones and virtual assistants has increased the demand for not only accuracy in automation but speedy responses as well, Alves said.

Two more examples of digital adoption followed in the day’s second session. Millennium Bank’s head of IT, José Uribarri Soares, showed how technology could have a direct effect on client longevity.

A joint presentation from Kartik Chillakantin from Moxtra and Andrew Trythall from Prosperity turned into a live demonstration as the duo showed how their technology could link client to advisor in seconds.

Another joint presentation, this time from Patrick Odoni and Christophe Brisson from Capital Banking Solutions, showed how private banks could easily and efficiently adopt technology through building blocks. This is cheaper than other methods, they argued.

“The banker has to help the client walk the walk,” said Mahesh Bulchandani, the CEO and director of FinIQ Europe. Only automation can help the banker in that task, Bulchandani said, providing an example of automation at a large multinational private bank.

“How do you ensure a consistent definition of sustainability? Nuclear power is cleaner energy than oil and gas… so helps to build a sustainable world,” asked one member of the audience.

Their question was directed at Joseph Oumarou, assistant vice president at Banque Cantonale de Genève, whose presentation focused on impact investing and ESG.

The choice of investment was down to the investor said Oumarou. Definitions between sustainable and impact investing and ESG remain blurred, however. Asked what would be needed to make sustainable investments mainstream, Oumarou said clarity over definition and universal ratings would help.

While UN Sustainable Development Goals were adopted in the monitoring of ESG and impact investments, a more transparent auditing of these investments was needed. 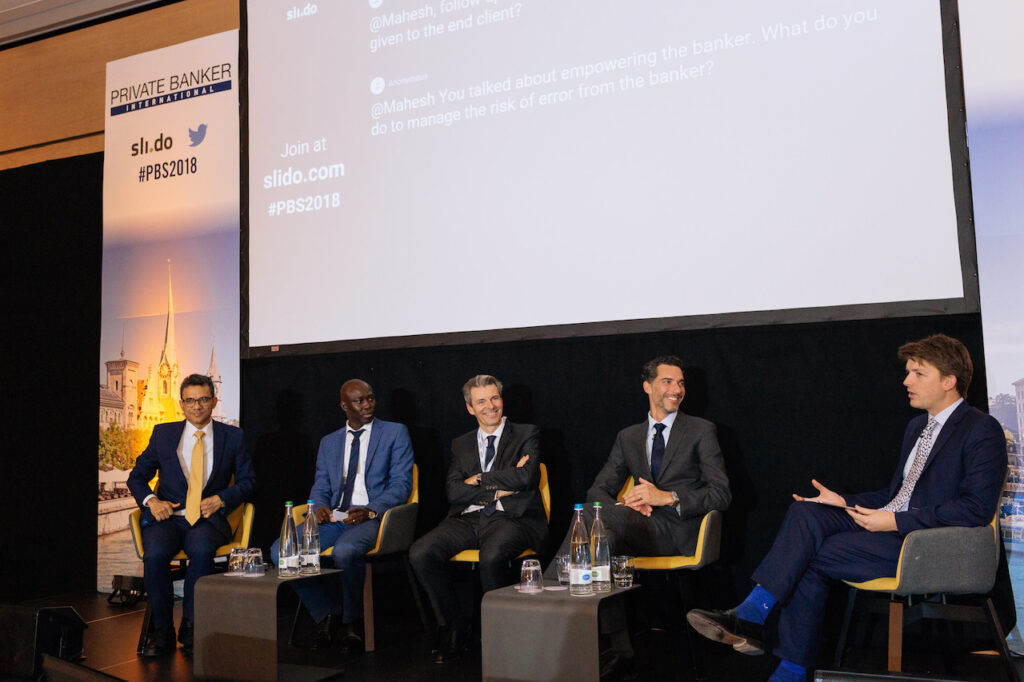 What of Swiss private banking?

Having set a benchmark for prediction, no PBI Switzerland event could end without some remarks from speakers and panelists on the future of private banking in the country. That was the question Ian Woodhouse, head of strategy and change at Orbium, asked the final panel of the day.

Wagner, back on stage after his morning’s presentation, was quick to list why there was reason for optimism: “The country is still a stable hub, we haven’t been in a war since 1812, its very traditional and safe, Etherium [the cryptocurrency] was founded in Zug, the sustainable investment community in Switzerland is the most developed.”

Vidal noted was also optimistic. He said the country’s future as a hub for fintech was positive. BNP has set up incubators all over the world, he noted, and Switzerland is their most expensive one. “But we’re not closing it”, he said. The incubator was their most successful to date.

That was not a view shared by Tobias Unger, regional manager for Switzerland and Liechtenstein and member of the group executive board at Avaloq. There was little actual innovation in Switzerland, said Unger, because “there is not enough risk takers”, a direct effect of having “too many well-paid jobs.

“We’re all living too well in order to provide those push factors to force someone to get out and build a startup”.

Switzerland, therefore, has to “be active in marketing its capabilities,” added Wagner. The alpine nation needs to show-off its credentials in order to attract talent from overseas. These future and foreign innovators will keep Switzerland and private banking relevant.

While most were upbeat about Swiss private banking, the day’s speakers were noticeably tight-lipped about cryptocurrency. This is interesting because last year’s PBI Switzerland conference was dominated by crypto-conversations. The price of Bitcoin soared as speakers debated its merits. One year on Bitcoin is almost back where it started.

This time PBI Switzerland was hosted against a Brexit backdrop. Later that day all Brits in the room were glued to the news as Conservative Party voted a motion of confidence on their leader, prime minister Theresa May.

If anything, Brexit and Bitcoins have shown the danger of making bold predictions. 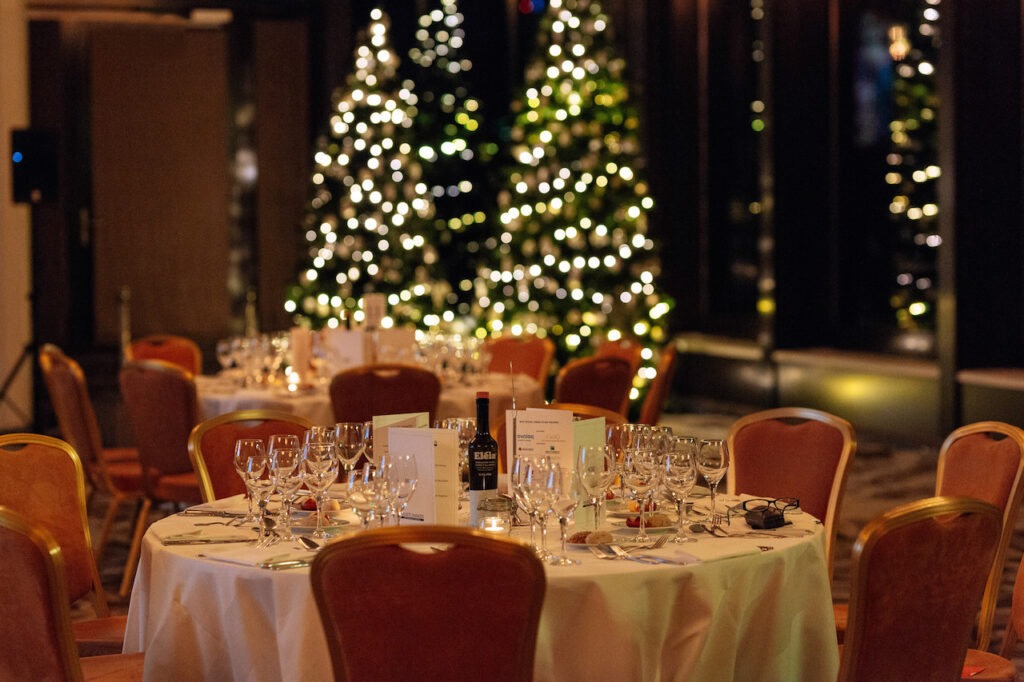