A general election and political tensions with Pakistan are causing caution in India. However, GlobalData’s new report predicts an optimistic economic future for the wealth market. Mishelle Thurai looks at its findings.

Thank you.Please check your email to download the Report.

Optimism surrounding the Indian wealth management sector has suffered a period of doubt in recent years. In 2015, HSBC decided to close its private banking business in the country following the lead of UBS and Morgan Stanley. All three major banks took the view that India was not a fertile market for the wealth management industry.

Wealth management in the country was struggling not because of a lack of HNWIs, however. Nor were political tensions to blame. The market was over-saturated, with high operating costs and a myriad of regulations.

In June 2018, a turning point came when investors led by Ward Ferry and General Atlantic, paid $110m to acquire a 5.1% equity stake in IFL wealth management. 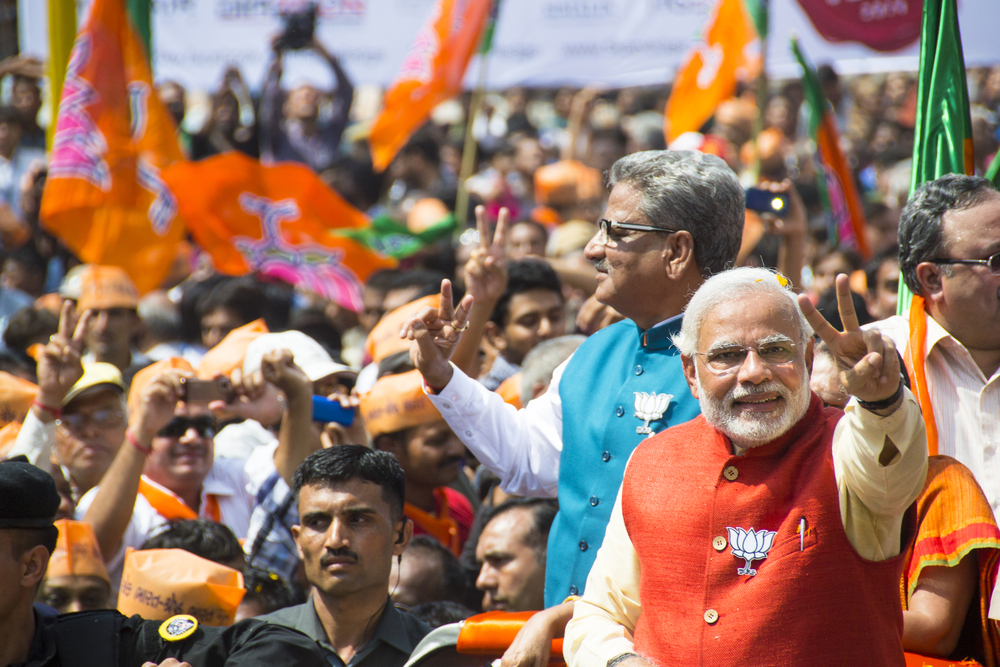 Currently India is the fastest growing G20 economic power. GDP growth for 2018 is expected to grow 7.4%, a rate that will be sustained throughout 2019 according to the IMF.

GDP matters says David Cornell the CIO and managing director of Ocean Dial, which manages the India Capital Growth Fund: “The point about that is its consumption coming off a very low base. GDP per capita is $2,000 a head. Mexico is about $8,000 a head. India is today where Mexico was 36 years ago. But its population is tenfold.”

The current Indian government under Prime Minister Narendra Modi has implemented wide-ranging reforms which have impacted and improved this business environment. A prime example of this is the Goods and Services Tax (GST) implemented in 2017 to replace various layers of central and state government taxes. Fewer taxes on goods and services could mean lower prices for consumers.

With the economy forecasted to rise growth of affluent individuals – those with more than $50,000 – is forecast to grow at a rate of 12.6% between 2018 and 2020 according to GlobalData.

High net worth individuals are set to grow even faster. GlobalData says there will be 301,390 HNWIs by 2022. 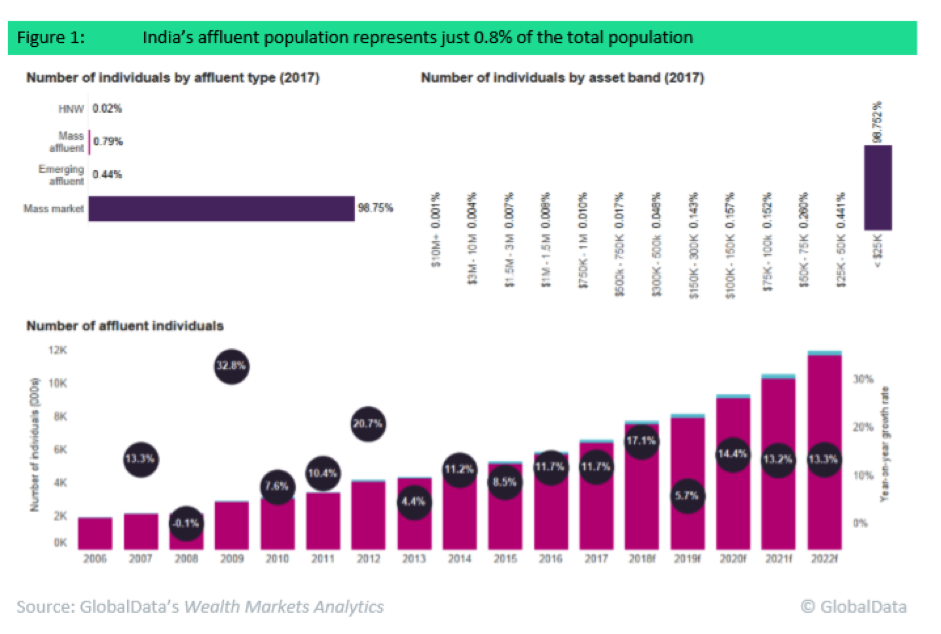 Indian HNWIs allocate on average 19.6% of their total portfolio to property according to GlobalData’s 2018 Global Wealth Managers Survey. This is far above the global average of 11.2%.

Even though property appears to be an attractive asset choice, wealth managers are advised to guide clients through a complicated landscape with potential pitfalls.

Mumbai’s residential property market has recorded a growth of 7.5% over the last four years, while Delhi’s has declined on average of 0.7% a year. Some suggest the property market is bottoming out. According to GlobalData, fundamental issues like surplus-housing stock mean returns on property will be scarce in the coming years.

However there is better scope for alternative investments, which account for 9.3% of Indian HNW portfolios. Since the creation of the Alternative Investment Funds (AIF) category by the Securities and Exchange Board of India, the availability and demand have both increased.

The Exchange Board shows that there were 21 registered alternative funds in 2012. This figure had risen to 366 by the end of 2017.

Arivind Bansal head of products and advisory at Avendus Wealth Management told Business Standard in 2017: “The landscape of Indian investors is changing fast with a huge spike in wealthy investors and family offices.

“This has created demand for products like AIFs. Fund managers and professionals, especially with entrepreneurship aspirations, are increasingly turning towards AIFs as they offer greater flexibility. The capital requirement and compliance burden is also less.”

There has also been an increase in mutual funds held by Indian HNWIs according to GlobalData. The growth is forecasted to continue after the Association of Mutual Funds in India launched an awareness-building campaign. Sahi Hai was launched in 2017 to educate investors that mutual funds can be a low-risk investment choice.

The top two drivers for property purchases amongst HNWIs in India are investment purposes and having a second or holiday home. The demand for investments abroad is also driven by the stagnant state of the domestic residential property market.

However, India’s Liberalised Remittance Scheme limits the value of money an individual can send offshore in each financial year. This includes foreign property purchases and foreign share purchases.

The current limit stands at $250,000 but is periodically revised by the Reserve Bank of India. In 2013 the limit was dropped to $75,000 following a devaluation of the rupee and a temporary ban on foreign property purchases.

Wealth managers will need to guide clients through the complex tax and legal requirements for offshore holdings. Guidance given to clients on overseas property purchases will be imperative to the sector. 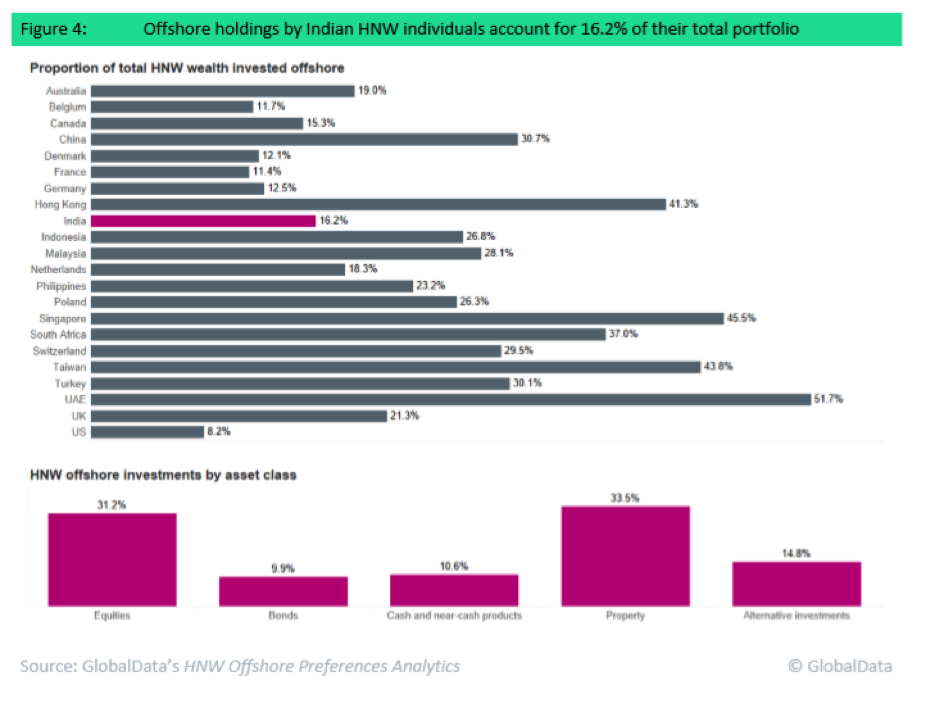 India has signed 93 double taxation treaties with foreign countries, the most recent one with Hong Kong in 2017. India also has 19 tax information exchange agreements in place with offshore centres including the Bahamas, Bermuda, and Jersey.

A crackdown on ‘round tripping’, where wealthy individuals send funds abroad only to bring them back via an offshore shell company, has helped reduce tax evasion. As of April 2017, India now has the right to levy capital gains taxes of 7.5% (50% of the current domestic rate) on share transfers, but from March 31, 2019, the full 15% rate will come into force.

In September 2015 India and the US signed the Foreign Account Tax Compliance Act (FATCA), this sees the two countries exchange information annually on a reciprocal basis.

The future of wealth management in India

With the 2019 general elections around the corner, India’s wealth market lies in a state of optimistic uncertainty. Prime Minister Narendra Modi is campaigning for re-election with his NDA party.

But the election is not the only thing affecting markets, the wealth one notwithstanding. India’s recent bombing of suspected militants in Pakistani has heightened tensions in the region not seen for a decade. As usually happens during periods of economic or political turmoil in a country, its wealthy residents are likely to look into means of investing more of their wealth offshore.

Wealth in the UAE: HNW Investors

Wealth in the US: HNW Investors