Mentions of robotics within the filings of companies in the private banking industry fell 19% between the second and third quarters of 2021.

In total, the frequency of sentences related to robotics between October 2020 and September 2021 was 500% higher than in 2016 when GlobalData, from whom our data for this article is taken, first began to track the key issues referred to in company filings. 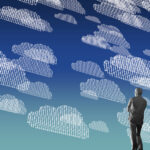 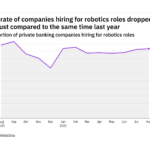 To assess whether robotics is featuring more in the summaries and strategies of private banking companies, two measures were calculated. Firstly, we looked at the percentage of companies which have mentioned robotics at least once in filings during the past twelve months - this was 24% compared to 5% in 2016. Secondly, we calculated the percentage of total analysed sentences that referred to robotics.

Of the 50 biggest employers in the private banking industry, Ping An Insurance (Group) Company of China Ltd was the company which referred to robotics the most between October 2020 and September 2021. GlobalData identified 16 robotics-related sentences in the China-based company's filings - 0.4% of all sentences. Sberbank Rossii mentioned robotics the second most - the issue was referred to in 0.19% of sentences in the company's filings. Other top employers with high robotics mentions included China Merchants Bank Co Ltd, Industrial and Commercial Bank of China Ltd and VTB Bank.

Across all private banking companies the filing published in the third quarter of 2021 which exhibited the greatest focus on robotics came from Yes Bank Ltd. Of the document's 3,387 sentences, seven (0.2%) referred to robotics.

In the last quarter, private banking companies based in Eastern Europe were most likely to mention robotics with 0.04% of sentences in company filings referring to the issue. In contrast, companies with their headquarters in Western Europe mentioned robotics in just 0.01% of sentences.