Complex conversations are part and parcel of private banking. But few relationship managers are equipped to deal with them. Oliver Williams speaks to Emily Griffiths-Hamilton, author and conflict resolution coach, about how to deal with difficult clients.

Every advisor dreads the late night phone call from a client. A panicked client equals a panicked advisor.

Emily Griffiths-Hamilton recommends advisors to think twice before answering such phone calls, however. “Firstly I will probably not answer a call at 10 at night,” she says in conversation with PBI. “But if somebody were to call me at 10 o’clock to ask something that I’m not qualified or comfortable in doing, I would say ‘talk to this person’, or give them an alternative.”

But this is just one of many scenarios when relationship managers are forced into scenarios where they have little or no training. Advisors qualified to handle investments find they are drawn into difficult conversations over ownership rights or succession plans.

When these become fraught – as they frequently do – advisors suddenly find themselves in the role of a mediator.

With private banks and wealth managers ramping up their digital offerings, clients now have the option of speaking with chatbots or advisors via various messaging platforms.

But there are some occasions when this is ever going to work, says Griffiths-Hamilton. “Fifty five per cent of our communication is face to face, so the best way to communicate is in person. In communicating, 35% is through our tone of voice and only 7% comes through text where there’s so much room for things going sideways.”

It is only through face-to-face communication where you can see the subtle clues: “I’m watching for not only what’s being said but what’s actually happening at the table, the way people react – whether they get defensive or they shutdown. There are subtle clues.”

If someone is fearful of speaking face-to-face then maybe seek a facilitator or resolution coach, recommends Griffiths-Hamilton.

You don’t need to be a psychologist. In fact, it is better not to be one

Despite the subtle psychologies displayed through face-to-face meetings, it is better not to know too much about the inner workings of the human mind.

There is a huge danger of unconscious bias through this kind of knowledge, Griffiths-Hamilton says. This is where the role of a mediator becomes more art than science: “What I see in families doesn’t requite psychology. It just requires sensibility and time.”

Always deal with the elephant in the room, but don’t rush in

Every advisor has been there; confronted by an elephant in the room. What do you do? Ignore it until somebody addresses it? Or wade straight in and bring it up?

This is one of the most complex issues of conflict resolution, says Griffiths-Hamilton, and rarely is it a straightforward process. No two elephants are the same.

“We all have elephants, but often it’s one of those multi-coloured elephants. You have to figure out what you’re dealing with.”

That’s the first step: Understand the nature of the beast. And this takes time: “I don’t believe it does anyone any good jumping right off and addressing those issues. You don’t have the tools. When you have an elephant in the room it is like having a boiling pot of sauce with the lid on. If you go ahead and rip that lid off the sauce is everywhere.

“The first thing I always do is throw the lid back on the pot. The idea is to have a facilitator in this area to let a little bit out at a time so people feel safe. You have to keep building trust within the group.”

Look for at the subtleties for signs of a breakthrough

It can be over family constitutions, ownership structures, or other issues more trivial, but client conversations seem like they can go on for an age.

However, look at the details and you will start to see minor breakthroughs, advises Griffiths-Hamilton.

“I’m listening to that subtle shift from the ‘I’ and ‘me’ to the ‘we’ and ‘us’. There’s that magic moment. When a family can do that it can do anything.

“Once we move from the ‘I’ to the ‘we’ then the process they’re working through – how to manage as a team, work out succession plans, etc. – are easier to develop together.” 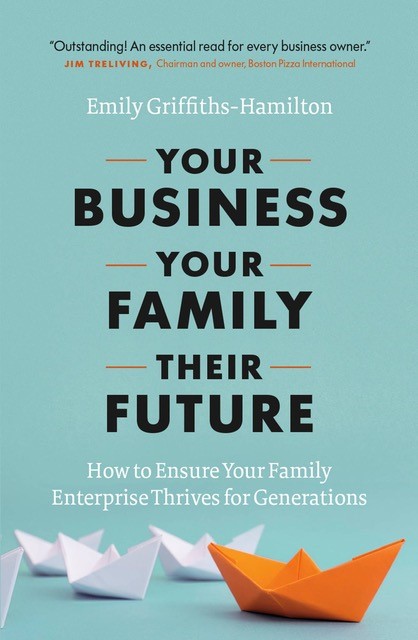 Your Business Your Family Their Future: How to Ensure Your Family Enterprise Thrives for Generations by Emily Griffiths-Hamilton